Highlights:
Read on for choice earnings call excerpts and my explanation of them. Manufacturers will feel increasing pressure to bust a move and establish global trade account management.

As I noted in McKesson, Rite Aid, and the Changing Generic Channel, Rite Aid’s generics will be sourced under McKesson’s OneStop Generics program. Rite Aid will fully transition its generics distribution to McKesson “over the coming months,” i.e., probably by summer’s end.

Last week’s earnings call also confirmed that Rite Aid will also be using NorthStar Rx, the McKesson subsidiary that sells private-label generic drugs as a manufacturer. For data on OneStop and NorthStar Rx, see Exhibits 71 and 72 of our 2013-14 Economic Report on Pharmaceutical Wholesalers and Specialty Distributors.


George R. Hill, Deutsche Bank Securities: I didn’t hear NorthStar mentioned in the prepared comments. I guess, can you provide any color on how NorthStar’s doing and when you’ll have the chance to provide NorthStar products to Rite Aid and Celesio?

John H. Hammergren: We continue to make great progress with NorthStar and in fact, have launched a version of NorthStar that’s called, Savant in Canada. And so both of those product lines are continuing to gain momentum. Now, clearly, we’re working closely with the manufacturing community to make sure we’ve got the best choice of product and the best choice of partners and the Rite Aid agreement does include NorthStar as one of the value offerings to both companies. As it relates to Celesio, which is probably premature to talk about, what we might be able to do with NorthStar or with the NorthStar model as it relates to many of the markets in Europe, but we clearly will have that as part of our evaluation as we get into that next phase.

As I predicted in McKesson Finally Snags Celesio: Analyzing the Deal, the fast-growing NorthStar business will play a key role in McKesson’s global strategy.

Over the next few months, McKesson will be bringing down the hammer on generic manufacturers. Check out these comments.


Glen J. Santangelo, Credit Suisse Securities: [H]have you been able to take that incremental volume amount to the manufactures and start to renegotiate the terms of those agreements? And if you’re not, are you starting to see some benefits today and if not, how long will that ultimately take?

MC Hammergren: When I spoke about the Rite Aid implementation, the first step really was to bring the combined volumes of our corporations together and go to the marketplace to make sure that we are providing the best opportunity to the manufacturers to gain access to that share position. We are now in the process of implementing the generics actually into – the distribution business into Rite Aid, but the value for McKesson relative to the renegotiation should begin to be realized basically effective right now at the beginning of this fiscal year. I might note however that none of the Celesio synergies or volumes or generic purchases, et cetera have been included in any of this upfront work with the manufacturers…[A]s we get into the late summer months, we should be reworking those relationships to include the Celesio volume as well.

In an April investor presentation, McKesson shared this overview of its post-Celesio global sourcing operations. As you can see, McKesson-Celesio has a significant presence in China and India. 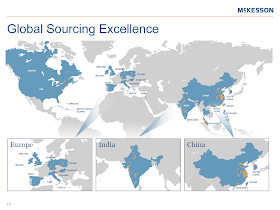 Unlike its competitors, McKesson will have a more centralized, unified approach to sourcing:


George R. Hill, Deutsche Bank Securities: Maybe a quick follow-up. A couple of your competitors are using JV or GPO type structures for the procurement of generic drugs. Is that something that makes sense to do with the inclusion of Celesio, or is the straight integration just McKesson buying the drugs directly from manufacturers and selling through the – I guess, through the supply chain, is that the right way? I guess, I’m just trying to think about industry structure going forward? Thank you.

MC Hammergren: No problem, George. We don’t plan to have any JVs or any type of unusual structure to get access to the synergies we believe are possible, and there was no JV structure as it relates to Rite Aid, will not be one related to Celesio. It will be McKesson’s sourcing operation that does all of the work.