Todd delves into the controversial Maximum Allowable Cost (MAC) reimbursement methodology. As Drug Channels readers know, a MAC establishes the reimbursement limit for a multiple-source drug. MAC legislation has passed or is pending in 22 states. Todd provides direct links for all legislative activity below.

He then describes Predictive Acquisition Cost (PAC), an alternative benchmark that aims to get closer to a pharmacy's true acquisition cost. Drug Channels readers can analyze MAC pricing by downloading the PAC – MAC Optimization Calculator, an Excel workbook with data on five key generic drugs. Cool!

Please contact Todd (tgrover@glassboxanalytics.com) with any questions about the article.

In March 2013, Kentucky became the first state to enact legislation that provides pharmacists with transparency into how health plans determine pharmacy reimbursement for generic drugs and establishes an appeal process when a dispute arises over those payment levels. (source)

In March 2014, the National Community Pharmacists Association (NCPA) announced its successful effort to have the governor of Iowa sign legislation into law (H.F. 2297) that gives independent community pharmacists insights into their reimbursement from pharmacy benefit managers (PBMs) for common generic drugs. The legislation also lays out an appeal process to resolve inconsistencies that may arise if the PBM reimburses at a lower or outdated rate when the drug acquisition cost would have increased for the pharmacy. (source)

According to the 2011 report by health care consulting firm Visante, PBMs will save companies, Medicare and consumers nearly $2 trillion on prescription drugs between 2012 and 2021. (source) The NCPA however describes maximum allowable cost (MAC) as the “black box” of pharmacy reimbursement, igniting legislation for drug pricing and reimbursement transparency. Below, you can review a list of current and pending MAC legislation.

Generic drugs account for approximately 80 percent of prescriptions dispensed, but the policies payers determine for reimbursement caps or MACs for generic medications are unclear for pharmacies. According to NCPA, pharmacies also feel that payment levels and MACs are set in secret and not updated frequently enough to reflect spikes in a generic drug’s cost. Last month, the Generic Drug Pricing Fairness Act (H.R. 4437) was introduced to amend title XVIII of the Social Security Act to provide for PBM standards under the Medicare prescription drug program to further transparency of payment methodologies to pharmacies, and for other purposes. A similar bill, PBM Audit and Generic Drug Pricing Transparency Legislation (S. 867), addresses Medicare Part D programs and the need to promote fairness among PBM audit practices and generic drug pricing transparency.

Guidelines that control pharmacy reimbursement rates are designed to help plan sponsors understand drug pricing for those with contracts requiring pass-through pricing. PBMs and pharmacies in Alabama for instance, are not allowed to establish reimbursement rates or actions for members under a prescription plan that would be less than the “usual and customary rate” a non-member customer would pay for identical or similar services.

PBMs in Mississippi must utilize a nationally recognized reference, which must be updated every three days, in calculating pricing for pharmacy reimbursement. Tennessee is required to use the most current reference price. As mentioned earlier, Kentucky’s legislation requires the source PBMs use for calculating payment to pharmacies be identified in their contracts. Overall, legislation encourages contracts between pharmacy networks and PBMs to include requirements for identifying the national drug pricing compendia or source PBMs use to obtain drug pricing data for every drug with an established MAC as well as include provisions allowing a pharmacy to appeal payments based on MAC. (source)

There is no question that PBMs and the health plan that monitor their MAC prices must be able to point to a sound methodology around pricing in general and be able to rationalize pricing for any particular drug. Not only is it now law in several states, establishing fair and transparent processes for reimbursement and MAC setting can improve and enhance pharmacy network relations.

Predictive Acquisition Cost (PAC) assists with both developing and demonstrating a sound methodology for setting MAC prices. PAC, along with supporting information displayed in the PAC Dashboard, facilitates compliancy with new legislation while accomplishing improved pharmacy network relationships. A PBM, for example, currently points to PAC as part of how the organization satisfies network queries relating to such legislation. 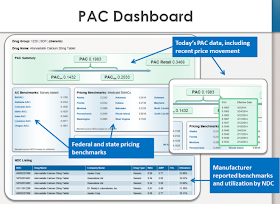 Health Plans and PBMs can gain advantage in other states by showing that they have a clear and better methodology to drug pricing and reimbursement. 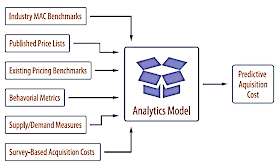 Find out now if your MAC pricing is currently balanced and fair, click here to download the PAC – MAC Optimization Calculator. This calculator allows you to enter your (or your PBM’s set) MAC price of five current example generic drugs and your average quantity dispensed per script. Based on assumptions to establish a minimum profit per script for pharmacies in your network, a low and high MAC price is computed.

Depending on your MAC price, a proposed action is suggested: increase MAC, reduce MAC or no change. A suggested decrease could result in significant financial benefits for the organization; a suggested increase could improve pharmacy network relations by quickly identifying situations where reimbursement is low. In the end, justifiable, fair pricing based on informed knowledge of the true acquisition cost of a drug is apparent with the use of PAC.

Here is an overview of states that have legislation or have legislation pending in regards to providing clarity on the source of MAC pricing and standardization of how products are selected for inclusion on MAC lists. (source)