The IMS Institute for Healthcare Informatics recently released its official 2013 market data in the thoroughly titled Medicine Use and Shifting Costs of Healthcare: A Review of the Use of Medicines in the U.S. in 2013 (Free download with registration.) The report offers many interesting (and some inaccurate) stats, but I focus here on the prescription data.

Below, I discuss the industry's winners and losers, and summarize the data in a tidy chart. Highlights:
Take note: Some of IMS’s data changed significantly. Tricare stopped providing its data, for instance, while Walmart began providing data. I discuss details of these changes below.

We created from the chart below from the data on page 49 of the IMS report. Note that we present the data differently from IMS to offer insights into retail pharmacy industry dynamics. IMS reports that total prescription growth was 1.6%. Our growth rate (+0.2%) is lower because 1) we exclude long term care pharmacies from the computation, and 2) we use equivalent prescriptions (actual prescriptions x 3) for mail pharmacies. 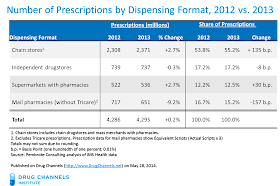 Chains rebounded in 2013. Prescriptions at retails chains—drugstores and mass merchants with pharmacies—grew more quickly than did overall prescriptions. Chain market share grew by 135 basis points, to a record-high 55.2% of all outpatient prescriptions. This reversed the overall loss of 2012, which we attribute to the market share losses Walgreens experienced when it chose not to participate in the Express Scripts pharmacy benefit network. As we show in 2013’s Top Pharmacies by Rx Revenues: The Big Get Bigger, the three largest chains—CVS (retail), Walgreens, and Walmart—account for 38% of U.S. prescriptions.

Supermarkets keep growing. Before 2012, supermarkets had been losing share. For the second consecutive year, supermarkets gained prescription share (+30 basis points). Kroger’s expansion has been particularly noteworthy. Kroger reduced its pharmacies—from 1,966 in 2010 to 1,947 in 2012. However, Kroger’s pharmacy revenues have grown by 21%, from $6.9 billion in 2010 to $8.3. Its late-2012 Axium acquisition accounted for only a minority of this impressive growth. Supermarkets have also been on the forefront of $0.00 prescriptions, led by such programs as Wegmans’ free generic Lipitor strategy and Publix’s free medication list.

Mail pharmacies keep shrinking. Mail pharmacies lost both absolute number of prescriptions (down 9.2%) and market share (-157 basis points). Note that the 2012 and 2013 data exclude prescriptions for Tricare, which now prohibits wholesalers from reselling data to such third parties as IMS Health. (Details below.) Even accounting for estimated Tricare scripts, mail prescriptions would still have declined significantly. Unfortunately for pharmacy benefit managers (PBMs), the 2013 prescription data are consistent with the long-term slowdown in mail pharmacy prescriptions. For the factors driving this decline, see the “Mail Pharmacies” section starting on page 34 of our 2013-14 Economic Report on Retail, Mail, and Specialty Pharmacies.

WHAT HAPPENED TO THE DATA?

On page 43 of its report, IMS includes these footnotes:


“National Sales Perspectives reporting – as of January 2012 - no longer includes data from a major wholesaler reflecting sales in several channels associated with Tricare, the health care program serving uniformed service members, retirees, and their families, which prohibits wholesalers from reselling data to third parties like IMS Health. An approximately 2% impact on total sales is seen between 2011 and 2012.”

“National Prescription Audit reporting – as of January 2014 – reflected the addition of Walmart data, with restated periods from January 2012 to January 2014, replacing data which was previously projected. An adjustment has also been applied to the mail channel prescription volumes to account for the Tricare data disruption, which after the adjustments result in a trend break between 2011 and 2012.”

Here’s some clarifying explanation, based in part on my conversations with IMS: