For 2013, Pharmacist Salaries Rise Yet Again For This Family-Friendly Occupation

Time for our exclusive annual analysis of pharmacist salaries, based on the Bureau of Labor Statistics’ (BLS) latest 2013 Occupational Employment Statistics (OES).

Once again, pharmacist salaries grew faster than overall U.S. wages. The highlights:
Details below. I also highlight a neat paper that analyzes how the growth of national chains turned pharmacy into a family-friendly, female-majority profession with a very small gender wage gap. It's a new twist on how free-market industry evolution can lead to positive social outcomes.

SHOW ME THE DATA

BLS and the State Workforce Agencies (SWAs) collaborate to create the OES survey. BLS funds the survey and dictates its structure, while the SWAs collect most of the data. The OES survey categorizes workers into detailed occupations based upon the Standard Occupational Classification (SOC) system. Your many burning questions are answered on the OES FAQ page.

Note that BLS computes the annual wage data by multiplying an hourly mean wage by the "year-round, full-time" figure of 2,080 hours. The data above show full-time, gross salary data. The wage data exclude bonuses and employer costs of nonwage benefits, such as health insurance and employer contributions to retirement plans.

SHOW ME THE MONEY

In 2013, pharmacists at retail, mail, and specialty pharmacies earned annual salaries averaging more than $117,500, up 1.1% from 2012. (See table below.) For the second consecutive year, pharmacists at mass merchants had the highest average salaries, earning a full-time average of $121,060. Annual salaries at supermarkets and mail pharmacies are lower, averaging about $112,000. 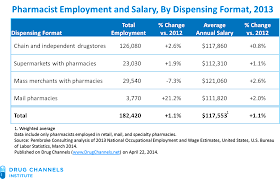 The OES data exclude “the self-employed, owners and partners in unincorporated firms.” Pharmacy owners are therefore not included in these figures. Based on industry survey data, the average pharmacist owning a single pharmacy earned about $245,000 in 2012 (the most recent year available). See Profits Rebound for Pharmacy Owners.

SHOW ME THE EQUALITY (NOW)

“The Most Egalitarian of All Professions: Pharmacy and the Evolution of a Family-Friendly Occupation” is a neat National Bureau of Economic Research (NBER) working paper by Claudia Goldin and Lawrence Katz. They argue that female pharmacists benefited as owner-operated, independent pharmacies were replaced by national chains and hospitals.

Here's an excerpt from the NBER’s summary:


“[T]he transformation of the pharmacy profession over the past half century, from one dominated by independent pharmacies to an industry overwhelmingly controlled by national pharmacy chains and hospitals, has made the occupation more family-friendly and female-friendly, with higher earnings and a lower gender earnings gap than other fields.”

“The authors don't attribute these dramatic changes to legislation, anti-discrimination policies, licensing requirements, or regulations specific to the pharmacy profession. Instead, they find that the changes are primarily due to structural transformation of the pharmacy profession's ‘compensation framework’ over the decades, including the decline of earnings premiums flowing to self-employed pharmacists and the reduction of implicit earnings penalties for those who work part-time and part-year. Both of these developments generally have worked in favor of women. Pharmacists also are good substitutes for each other, which leads to more flexibility in work hours and scheduling than in many other professions.”

You can purchase the full paper for $5 here.