Welcome to my latest round-up of noteworthy news stories from the Drug Channels ecosystem. In this issue:
Plus, The Onion provides valuable advice for pharmacies looking to boost their Medicare star ratings.

Pfizer Sees Tax Savings From AstraZeneca Deal, The Wall Street Journal
Tax inversion is in the air! Pfizer’s proposed acquisition of AstraZeneca could allow Pfizer to move its headquarters overseas. According to this Wall Street Journal article: “Pfizer paid a 27.4% effective tax rate last year, compared with 21.3% for AstraZeneca, according to regulatory filings. Every percentage point in tax reduction could add $200 million to Pfizer's net income...”

The politics will be ugly. But if Pfizer pulls off a post-deal tax inversion, then not much will stand in the way of a Walgreens-Alliance Boots move. For my thoughts on the Walgreens situation, see Inversion Uncertainty: Is Alliance Boots Really Acquiring Walgreens? and Walgreens Faces Post-Alliance Boots Inversion Pressure.

BTW, the WSJ had this nifty graphic of Pfizer’s family Tree: 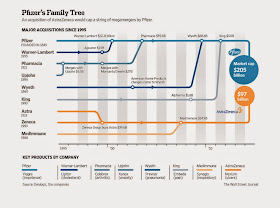 Not so fast. On April 11,UHC changed its mind, announcing that it would *not* implement a plan to have retail pharmacies “discontinue the facilitation of copay coupons.” (Gotta love the corporate-speak.)

What happened? As I speculated to Drug Benefit News, UHC's retail network was not ready or willing to implement a draconian ban on co-pay programs. The average consumer sees co-pay offset as a discount and is not motivated by vague notions of "increases in overall health care costs." UHC also lacked leverage to force pharmacies to go along with the program.

UHC will need to reconfigure its pharmacy network relationships before trying again. Today, a pharmacy's participation in a payer's narrow network is based primarily on the pharmacy's willingness to accept reduced reimbursements. Looking forward, copay programs could shape PBMs' preferred and limited pharmacy networks. Pay attention to this trend.

Physician Shoots Off A Few Adderall Prescriptions To Improve Yelp Rating, The Onion
Here’s a good article on the consumerization of healthcare. Primary care provider Dr. Frank Hawley tells The Onion: “I keep a pretty close eye on my reviews, and whenever I see my number fall below four stars I just write out a few extra Adderall or Dexedrine scripts and it’s back up in no time.” Should pharmacies learn from his example to boost their Medicare star ratings?