Just in time for the first day of spring, Zitter Health Insights (ZHI) has released the latest edition of its Co-Pay Offset Monitor. As far as I know, it’s the most complete resource for tracking these controversial programs. 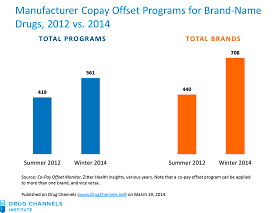 THE SWEET NECTAR OF COST SAVINGS

The table below summarizes the results for the third quarter of 2013. On average, about 37% of specialty pharmacy prescriptions used a co-pay offset program, although usage varied dramatically among therapeutic class. 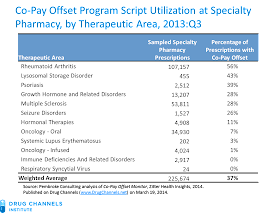 
“[S]ome drug manufacturers’ coupons are clearly designed to increase sales of brand‐name products, even though less expensive options exist. Members may not know that using these coupons can increase costs for their benefit plan. Since most people with insurance do not pay the full cost of their drugs, it is usually the plan sponsor who ends up paying the price for bad coupon use.”

But as I argue in How the Fourth Tier Coinsurance Boom Drives Copay Offset Programs, the prevalence of fourth-tier coinsurance is closely linked to co-payment offset programs. Consumer out-of-pocket expenses are a small portion of average prescription prices, especially for more-expensive specialty therapies. Some consumers, however, are being asked to pay a greater share of prescription costs for more-expensive specialty drugs.

Thus, in contrast to its views on copayment programs for traditional drugs, Prime Therapeutics argues: “When it comes to specialty drugs, however, coupons can help make high cost medicines more affordable.” (source)