In the 340B drug discount program, contract pharmacies are a crucial, but little understood, cog in the 340B money machine. Hospitals can pocket big profits from retail pharmacy prescriptions that are paid by commercial health plans and Medicare Part D. It’s all technically legal, especially since there are no regulations on what’s OK.

With little oversight and big money at stake, I’m not surprised that the program is still expanding at a breakneck pace. Consider:
This will be a big year for the 340B drug discount program. The Health Resources and Services Administration (HRSA) promises to (finally) release long-overdue proposed regulations. The Office of Inspector General (OIG) expects to release a study on “program integrity” of 340B contract pharmacy arrangements. (Details below.) Let’s hope these developments get the 340B contract pharmacy program properly focused on helping needy patients access these medications. But I’m skeptical.

In Hospitals twist prescription assistance program for their own benefit, I summarize how 340B hospitals are profiting from fully insured, third-party-paid prescriptions. These profits may or may not benefit uninsured and needy patients.

Chapter 8 of our new 2013-14 Economic Report on Retail, Mail, and Specialty Pharmacies provides an overview of the 340B drug discount program. Exhibit 97 (page 163) of the report illustrates the flow of funds and products for a typical scenario involving a 340B-eligible hospital and a contract pharmacy.

To profile today’s 340B contract pharmacy market, Pembroke Consulting examined HRSA's Contract Pharmacy Daily Report, as published on January 3, 2014. We screened out all terminated contracts. Then, we classified pharmacies by parent organization. For instance, our analysis classified Duane Reade and Happy Harry’s pharmacies as Walgreens pharmacies.

As of January 2014, there were 4,530 different 340B entities with 32,478 contract pharmacy relationships. We counted 13,708 unique pharmacy locations, which is more than 20% of total U.S. retail, mail, and specialty pharmacy locations.

By comparison, our analysis of the July 2013 HRSA database found 12,635 unique pharmacy locations. The number of contract pharmacies has grown by 1,073 (+8.5%) in just six months! (Read our previous analysis.) 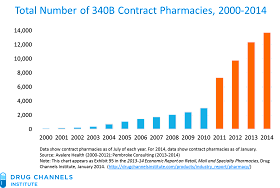 As the chart below shows, Walgreens remains the biggest player, with 39% of all 340B contract pharmacy locations. The other major chains—Walmart, Rite Aid, CVS, Kroger, and Safeway—lag behind, accounting for a combined 24% of 340B pharmacies. However, their collective share has increased from July’s 19% share. There are also thousands of independent drugstores and small chains. 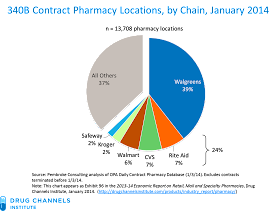 In August, Senator Charles Grassley (R-IA) asked Walgreens to provide details about its 340B contract pharmacy operations. (See Senator Grassley Grills Walgreens About Its 340B Profits.) He is requesting information on “profits generated as a result of participating in the 340B program as a contract pharmacy.” He also wants details on the financial arrangements between Walgreens, a 340B covered entity, and a split-billing software vendor. Alas, we’ve still heard nothing publicly about this inquiry.

Most 340B entities have small networks, but some operate unusually large ones.

About 44% of 340B entities use a single contract pharmacy. However, we discovered that 111 of the 340B entities (mostly hospitals) have built mega-networks of 50 or more pharmacies.

We have also discovered an emerging set of 340B-focused specialty pharmacies that work with dozens of 340B hospitals. I’ll say more about these companies in a future post.

The exploding contract pharmacy situation raises many questions. Are uninsured and indigent patients benefitting from 340B drug discounts earned from commercially-paid prescriptions in retail pharmacies? Does the use of contract pharmacies in the 340B program shift excessive costs to commercial third-party payers? Does HRSA provide adequate oversight to ensure that covered entities use contract pharmacies appropriately?

Twenty-two years after the program’s launch, HRSA is finally working on formal regulations to “address the definition of an eligible patient, compliance requirements for contract pharmacy arrangements, hospital eligibility criteria, and eligibility of off-site facilities.” (source) HRSA expects to publish the proposed regulations by June 2014. Hooray?

Meanwhile, the OIG's Work Plan for Fiscal Year 2014 includes three 340B-related studies. One of its reports will “assess the extent to which selected 340B-covered entities and HRSA oversee contract pharmacies’ compliance with 340B Program requirements.” (See page 59 of the OIG work plan.)

Some 340B entities truly require additional financial support. However, there are also many large, profitable, well-funded health systems that appear to be taking advantage of the program by using 340B revenues in ways that can’t be linked to the drug discount program’s initial purpose. (See Hospitals' Extraordinary 340B Pharmacy Profits from Insured Patients.)

I look forward to the long-promised transparency into the mysterious 340B contract pharmacy market. In the meantime, the cash will keep flowing around this murky corner of our healthcare system.