Once they get organized, McKesson-Celesio-Rite Aid will be the largest generics buyer in the world. (See table below.) The new relationship has some common elements with the Walgreens-AmerisourceBergen (ABC) tie-up, although McKesson gains a more valuable sourcing position compared to ABC.

More significantly, the deal continues a revolution in how wholesalers interact with their biggest retail customers. Below, I contrast the various wholesaler-customer deals and highlight implications for wholesalers’ channel role, generic buying, downstream speculative buying, AMP-based FULs, and more. Be prepared for more change. 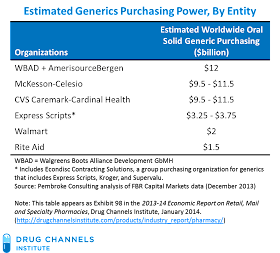 Larger pharmacies typically buy brand-name drugs—but not generics—via a drug wholesaler rather than directly from a manufacturer. (To understand why, see Chapter 6 of the 2013–14 Economic Report on Retail, Mail, and Specialty Pharmacies.) The changing relationship between wholesalers and large pharmacies is highlighted by Walgreens’ unprecedented arrangement with AmerisourceBergen.

In September 2013, ABC began a 10-year agreement to be Walgreens’ primary brand-name drug supplier. ABC took over distribution for the 60% of brand-name drugs that had been distributed from Walgreens’ own warehouse network. In 2014, ABC will assume responsibility for generic products that Walgreens has historically self-distributed.

But unlike the WBAD-ABC arrangement, generics will be sourced under McKesson’s OneStop Generics program. McKesson does not report the total dollar revenues from OneStop generic drug sales but does report growth rates. (See Exhibit 71 of our 2013-14 wholesaler economic report.) McKesson also has the advantage of Northstar Rx, a McKesson subsidiary that sells private-label generic drugs as a manufacturer.

By contrast, the WBAD joint venture is attempting to source generic drugs for Walgreens and ABC. (See Breaking WBAD: An Update on Walgreens-Alliance Boots Synergies.) Under the Generic Pharmaceuticals Purchasing Services Agreement between ABC and WBAD, AmerisourceBergen has the right to source generic drugs and other products through WBAD. This element is so important that AmerisourceBergen can cancel Walgreens’ equity warrants if WBAD terminates the purchasing agreement.

Some reflections on the changing channel:
The coming end of the generic wave (and the corresponding specialty boom) will reshape the drug channel for everyone. Get ready for a new channel lineup.