EXCLUSIVE: 340B Is Taking Over the Hospital Market—With a 25% Share

At the recent 340B Coalition winter meeting, Apexus President Chris Hatwig revealed that 2013 purchases made under the 340B drug discount program were $7.5 billion. Hospitals accounted for 87% of this total. (source) After the article was published, Chris told me that the actual total was $7.2 billion.

Is $7.2 billion a big number? Defenders of the 340B status quo, such as the American Hospital Association, argue that this amounts to “only 2%” of U.S. drug purchases.

However, the 2% figure is just misleading propaganda. In reality, 340B is rapidly taking over the hospital market, which accounts for almost 90% of 340B purchases. Our exclusive analysis, detailed below, shows the reality:
These numbers are extremely disturbing, since two-thirds of hospitals do not offer the reduced 340B prices to uninsured patients. (See New OIG Report Confirms Our Worst Fears About 340B Contract Pharmacy Abuses.) Given the money at stake, how can this status quo be considered acceptable? Let’s hope HRSA’s forthcoming proposed rule brings greater accountability to this out-of-control market and refocuses the 340B program on uninsured patients.

The chart below shows the startling growth in purchases made under the 340B drug discount program. Having briefly stabilized from 2006 to 2009, 340B purchases grew sharply after passage of the Affordable Care Act. It’s no coincidence that this growth corresponded to the HRSA-blessed explosion in 340B contract pharmacies. (See the first chart in Walgreens Still Dominates Booming 340B Contract Pharmacy Market, with CVS and Rite Aid Right Behind.) 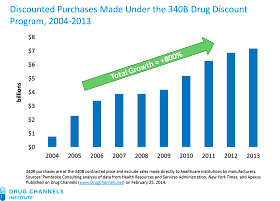 At the recent 340B Coalition winter meeting, Apexus’ Hatwig stated that hospitals accounted for 86.6% of all 340B purchases. However, the rapid 340B growth is not due to increased demand for hospital services.

As a result, 340B is taking over the hospital market. In 2004, hospitals received 340B discounts on about 3% of their drug purchases. By 2013, the 340B share had risen to more than 25% of purchases. (See chart below.) The actual percentage is likely higher, because direct sales are not included in the 340B totals. 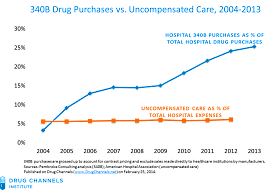 The website 340BFacts.com recently touted the fact that hospitals provided $45.9 billion in uncompensated care in 2012.  Despite booming 340B purchases, uncompensated care as a percentage for hospitals’ total expenses has hovered at about 6% for many years.

So, where does the money go? No one really knows. There’s still no transparency or accountability for the billions in 340B rebates that hospitals are collecting. Release the hounds!

Here are the data sources behind the computations above:
Assumptions:
Note that the 340B data understate total purchases, because they exclude an unknown amount of manufacturer sales made directly to healthcare institutions.