Data on PDP enrollment are available from this CMS page: Medicare Advantage/Part D Contract and Enrollment Data. Note that these data reflect enrollments accepted through December 4, 2013. The final 2014 numbers will differ, because the open enrollment period ended three days later (on December 7, 2013).

My evaluation includes only stand-alone PDPs. I eliminated the following plans from the sample:
My final sample included 106 plans operating 1,186 regional PDPs. Note that the sample differs slightly (but not materially) from October’s pre-enrollment data.

In 2014, there are 60 Part D plans with preferred pharmacy networks. These plans operate 851 regional PDPs, which account for 72% of the total regional PDPs for 2014.

Based on the initial enrollment figures, these 60 plans enrolled 13.9 million people, or 75% of the total. That’s incredible growth from 2013, when only 43% of seniors chose plans with preferred networks.

The eight largest organizations (shown below) account for 86% of total enrollments as of December 4, 2013. 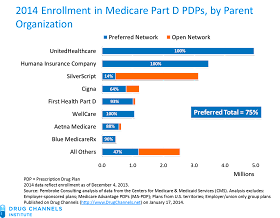 The chart below contains our exclusive summary of the ten largest Medicare Part D PDPs with preferred pharmacy networks. These 10 plans account for 64% of total Part D enrollment. For a summary of pharmacy chains’ participation in preferred networks, see Walmart Plays to Win in 2014 Part D Preferred Networks, while CVS and Rite Aid Lag. 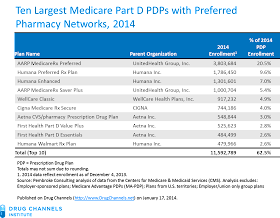 In 2015, preferred networks’ wax wings will start to melt. Until then, tune in for the final 2014 figures in mid-February. The 2013-14 Economic Report on Retail, Mail, and Specialty Pharmacies, available on January 28, thoroughly reviews the narrow network trend.