2013’s Top Pharmacies by Rx Revenues: The Big Get Bigger

The exhibit below, one of 98 in our new report, shows each company's market share of total U.S. prescription revenues for calendar year 2013. Highlights:
Read on for the 2013 details. For a sneak peek at the new 2013-14 report, check out the free Overview. 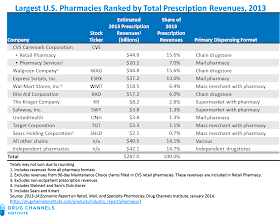 The chart reflects many significant market developments in 2012 and 2013:
A few other comments:
I’ll tell you more when the report in launched next week. Stay tuned!

P.S. Feel free to cite or link to these estimates. As a friendly reminder, please attribute the source properly.