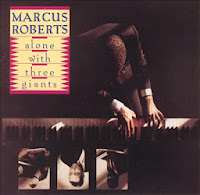 The joint venture plans to start operating by July 2014—just in time to influence the new Average Manufacturer Price (AMP) data! Here’s the summary slide that the Cardinal presented yesterday at its analyst day meeting. 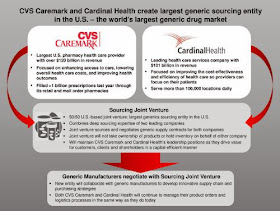 CVS Caremark + Cardinal = the third mega-generic buyer. The CVS Caremark/Cardinal combination will have about $10 billion in combined global generic purchasing power, per the figures shown in Quantifying Generic Buying Power for McKesson-Celesio. That’s comparable to the Walgreens-Alliance Boots-AmerisourceBergen and McKesson-Celesio combinations. Put another way, it’s King Kong vs. Godzilla vs. Mothra.

Yes, generic manufacturers will cave and cut deals with a retail/wholesale combination. In theory, generic manufacturers could push back on CVS-Cardinal by arguing about “class of trade” and “customers of customers.” (Same problem with Walgreens and ABC in the U.S. market.) In practice, the dollars are so large that generic manufacturers will just hold their noses and go for it. Recall that CVS Caremark was able to generate more than $800 million in synergy by combining CVS/retail’s drugstore purchasing with Caremark’s mail purchasing. Perhaps generic makers can find comfort in Marcus Roberts’ fine jazz album Alone with Three Giants.

CVS Caremark/Cardinal will benefit from a U.S. market focus. With the exception of CVS’ Brazilian acquisition and Cardinal’s China business, both companies sell primarily in the U.S. pharmaceutical market. Synergies will be easier, because there is no need to worry about country-specific differences in packaging, formulation, licensing, and other factors.

The joint venture structure allows for a lower-risk, faster launch. In a phone call yesterday, Cardinal CEO George Barrett told me: “This is a capital-efficient way to build scale quickly.” Thus, the joint venture can immediately start working without extensive business integration or acquisition expenses. Contrast that with the huge dollars that Walgreens spent (and will spend) to buy Alliance Boots, or with McKesson’s $8.4 billion deal to buy Celesio. (BTW, the McKesson-Celesio deal is on the rocks, thanks to hedge fund Elliott Capital Advisors and the quirks of German takeover law. See Elliott Announces Its Intention to Decline McKesson's Tender Offer for Celesio.)

The joint venture structure provides a comparatively clean, conflict-free partnership. Barrett said that the following key phrase guided the negotiation: “We respect each other’s business.” The end result shows this separation. As part of the transaction, CVS Caremark extended its brand-name wholesaler drug supply agreement with Cardinal. However, nothing else really changes for the companies' current supply chain and distribution operations. (For example, McKesson will continue to be Caremark’s primary brand-name wholesale supplier.) To learn about the economics of a wholesaler’s relationship with its larger customers, see chapters 2 and 4 of the new 2013–14 Economic Report on Pharmaceutical Wholesalers and Specialty Distributors.

The economics seem aligned. As part of the deal, Cardinal will be making a $25 million fixed quarterly payment to CVS Caremark. The total after-tax present value of payments is approximately $435M. As Barrett explained to me, these payments reflect the fact that CVS Caremark is bigger, so Cardinal’s payments will reconcile the size disparity and differential synergies.

WBAD is still right about synergies, but will be working harder. As I note in Breaking WBAD, Walgreens Boots Alliance Development (WBAD; pronounced “We bad”), the Swiss joint venture formed by Walgreens and Alliance Boots, is already outperforming its synergy targets. However, synergies come from a much more complex structure than the CVS Caremark/Cardinal joint venture. Switzerland-based WBAD negotiates globally with generic manufacturers. Layered on top is a separate Generic Pharmaceuticals Purchasing Services Agreement, which gives AmerisourceBergen the right to source generic drugs and other products through the WBAD structure. The Walgreens-AmerisourceBergen deal also included equity ownership and board representation.

Hmmm, what should we call a joint venture that combines CVS, Caremark, and Cardinal? In the spirit of WBAD, I humbly suggest C3, because (1) it applies the apparent alliteration, and (2) is related to C4 plastic explosive. Your ideas?