I spot three factors behind the deal:
Read on for details and background, some of which appeared a mere two weeks ago in CVS Caremark’s 2013 specialty trend report. CVS Caremark continues to expand throughout the healthcare system, swallowing up adjacent sectors with ease.

Two weeks ago, CVS Caremark released its Insights 2013 Specialty Drug Trend report. IMHO, it’s a worthwhile document, but I suggest that you download the PDF rather than endure the nausea-inducing animated “web magazine.”

Here’s a chart from the 2013 report that shows the costs of Remicade and its administration. The source is “CVS Caremark Internal data, 2013.”

The chart below, from the latest EMD Serono Specialty Digest (another worthwhile download), highlights the diversity of specialty benefit coverage for home infusion. 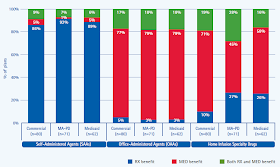 Caremark is a big player in both Medicare and Managed Medicaid, so controlling home infusion channel will provide significant advantages.

NOTHING CAN STOP IT

That’s why Walgreens has assembled an impressive roster of non-retail dispensing channels to augment its industry-leading retail pharmacy position. Its notable home infusion deals include:
Even grocery chain Schnuck Markets is getting into the infusion game, in the intriguingly titled You now can receive chemotherapy at Schnucks. (To me, that headline reads like: "You can now get your teeth cleaned at Burger King.")

The Coram acquisition is CVS Caremark’s biggest deal since it bought the Longs Drug Store chain. CVS Caremark can now play catch up as it oozes throughout the healthcare system. Beware!