The news is pretty good for pharmacy owners. Here are my observations from crunching the Digest's latest numbers. Full details below.
Hmmm, what happened to the doom-and-gloom predictions about the Express Scripts/Medco merger, which would, as NCPA said, “make an already bad situation even worse”? As the data below show, it was never that bad, and it hasn’t grown worse.

As always, I welcome your constructive comments. Just remember our philosophy, courtesy of the late Senator Patrick Moynihan: "Everyone is entitled to his own opinion, but not his own facts."

The 2013 NCPA Digest, Sponsored by Cardinal Health publishes self-reported 2012 financial and operating data submitted by pharmacy owners. While the report has some methodological flaws, it remains the only consistent source of pharmacy financial data. At the bottom of this article, I consider the Digest’s strengths and weaknesses.

Take a bounce down memory lane by reviewing my previous analyses:

Gross profit equals: (1) the revenues received by a pharmacy minus (2) the costs of products, net of discounts and returns, bought from a manufacturer or a wholesaler. Gross profit measures the portion of revenues available for the operating expenses and operating profit of a pharmacy. It reflects how much a pharmacy is compensated for taking on specific tasks and functions in the distribution system. Gross margin expresses gross profit as a percentage of revenues.

A pharmacy’s gross profit dollars can be spent in three primary ways:
This is a zero-sum formula: increasing one part will decrease another. For example, increasing Owner Compensation will decrease Net Operating Income. A pharmacy could report a “net loss” if the pharmacy owner chose to pay himself or herself a larger bonus instead of reporting a positive net profit.

The NCPA Digest reports the sum of Owner Compensation and Net Operating Income as Owner's Discretionary Profit (ODP). Thus, ODP represents two of the three ways a pharmacy's gross profit can be spent.

For more on pharmacy economics, see the 2012–13 Economic Report on Retail, Mail, and Specialty Pharmacies. 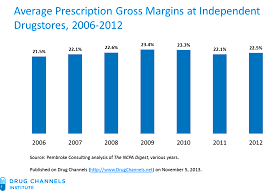 The Digest's average per-pharmacy revenue increased slightly (+0.6%). However, average revenue has dropped from its peak of $4.03 million, in 2009, to $3.85 million in 2012. This decline mirrors the overall industry trend that I describe in Drugstore Sales Drop Along with Drug Trend: Implications for Retail Pharmacy. The revenue decline is due to brand-to-generic substitution, not volume. Total prescriptions per pharmacy have remained fairly stable.

As in previous years, I compute the Owner’s Discretionary Profit (ODP) by multiplying the median ODP by average revenues.1 On a per-pharmacy basis, this figure grew, from $234K in 2011 to $245K in 2012 (+5%). The increase reflects both slightly higher per-pharmacy revenue in the 2012 sample and a higher median ODP.

Note that a pharmacy owner earns more than twice the salary of a employed pharmacist, per Pharmacist Salaries Hit $117K and Keep Climbing.

The NCPA Digest reports that in 2012, 25% of the Digest’s sample owned two or more pharmacies. With a bit of algebra, I computed that this 25% of the sample owned an average of 4.2 pharmacies. The remaining 75% owned a single pharmacy. In either case, these owners must be pharmacists to meet the NCPA’s definition of “independent pharmacy.”

OBSERVATION 5: The total number of independent pharmacies held steady in 2012.

According to the NCPA’s counting, the total number of independent community pharmacies has remained roughly stable: 23,064 in 2010; 23,106 in 2011; and 23,029 in 2012. The appeal of ownership clearly hasn't dimmed. Note that NCPA’s figures are higher than those from other third-party sources.

If you understand the components of gross profit above, you'll see why the loss figures are completely bogus. A net loss may simply mean that the owner drew a salary and bonus that pushed the business’s net profit figure into an accounting loss. As the data above demonstrate, the profit story for pharmacy owners remains good.

Here’s a quick summary of the NCPA Digest’s strengths and weaknesses.

Strengths
Weaknesses
1 When computing average pharmacy owner earnings in Observation 3, math geeks may fret that I am multiplying an average by a median. Never fear! The distribution of Owner’s Discretionary Profit Percentage in the 2013 Digest has a very slight negative Bowley skewness (-0.01), i.e., the median is slightly greater than the average. However, this figure is not statistically significantly different from skew=0, i.e., symmetry, so the average and median ODP are pretty close. See “Bonus Comment For Math Geeks” at the bottom of 2009’s NCPA Responds to Drug Channels.