Here’s another reason to be cynical about the Affordable Care Act's implementation.

The long-awaited Final Rule on Covered Outpatient Drugs, a.k.a., the AMP Final Rule, has been pushed back yet again, to May 2014. This follows at least two previous delays, described here and here.

Sounds to me like politics trumps the law. Given the dual debacles of healthcare.gov and “you can keep your insurance,” I presume the Obama administration wants to avoid political noise from the ACA's hit to pharmacy profits.

The delay is good news for the pharmacy industry. When (if?) the new AMP-based Federal Upper Limits get implemented, pharmacies in many states will face reimbursement cuts of 30% or more. See Obamacare Will Squeeze Pharmacy Profits.

For government notice aficionados, I have pasted the notice below. Enjoy Black Friday!

Here's a pre-Thanksgiving news roundup, to stretch your mind before stretching your stomach later this week. In this issue:
Plus, GlaxoSmithKline launches an ultra-orphan, “second term strength” version of Paxil. You’re welcome, Mr. President.

Retail Generic Drug Costs Go Up, Up, and Away

For an updated analysis, see Retail Generic Drug Inflation Reaches New Heights (August 2014).
Retail generic drugs usually get cheaper over time. But our exclusive analysis (below) shows that about one-third of generic drugs have gotten more expensive in the past twelve months.

Even more surprising, a small number have skyrocketed. Twelve drugs’ costs have increased by more than 2,000%.

Drug shortages appear to be the primary culprit. Contrary to what some people believe, exploding generic costs are the one thing that can’t be blamed on Obamacare.

Pharmaceutical wholesalers have been the big winners. Some pharmacies have also benefited, but many are being squeezed by third-party payer reimbursements. My big questions: will continued price increases slow the pharmacy industry’s race-to-the-bottom generic price war or make preferred network participation less appealing to pharmacies? Keep an eye on this trend.

The Pharmaceutical Care Management Association (PCMA) will hold its 2014 sPCMA Business Forum in Orlando, Florida, on March 12 and 13, 2014.

The new conference combines all of the networking, business, and educational benefits of the PCMA's previous spring conferences—the Managed Markets Educational Forum, the PBM Summit, and the Specialty Pharmacy Business Forum—into a single, two-day event.

Former Secretary of State Hillary Rodham Clinton will deliver the keynote address. Check the agenda for updates on speakers and sessions.

Regular readers know that Preferred pharmacy networks are kind of a big deal among 2014 Medicare Part D prescription drug plans (PDPs). You also know that Walmart is the biggest deal in these preferred networks.

In the TV commercial below, see how Walmart explains a preferred network's appeal, in just 30 seconds. Narrow networks are teaching consumers to shop for prescriptions by price. View the lesson below.

ABC Still Dominates Specialty Distribution, but Competition is Catching Up

Its Oncology Supply specialty distribution business again underperformed, as that distributor's revenues dropped by 10% in 2013. On the earnings call, the company blamed the decline on “reimbursement headwinds,” which I presume refers to the sequester’s impact on government payments.

But that’s only part of the story. As I discuss in DCI’s latest economic report (page 91) and in May’s What’s Behind AmerisourceBergen’s Disappointing Oncology Results?, the community oncology market is undergoing dramatic change, posing risks to specialty distributors. While ABC still accounts for more than 50% of total specialty product distribution revenues to physician offices and clinics, it also faces newly-energized competitors.

Read on for details and our market share estimates.

Drug Channels readers can register with code DTY526 to save $400 off of the standard registration rate.* Thanks, CBI!

Impact of Drug Price Benchmarks for Payers and Pharmacy Networks

Today’s guest post is from George Kitchens, RPh, President of Artia Solutions, and consultant for Elsevier.

Please contact George Kitchens (gkitchens@artiasolutions.com) with any questions about the article.

A Tale of Two Wholesaler CEOs 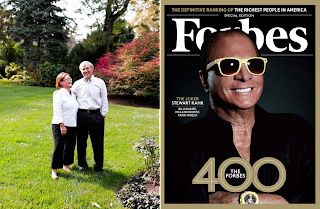 Imagine that you are the just-retired CEO of a major pharmaceutical wholesaler. How should you live your life?

Should you:
Put another way, should you follow the example of Dave Yost, former CEO of AmerisourceBergen, or Stewart Rahr, former CEO of Kinray Drugs? Read on for the just-published mundane and/or salacious details of their respective post-wholesale retirements.

Which one is the cautionary tale? Well, that's between you, your conscience, and your spouse.

The news is pretty good for pharmacy owners. Here are my observations from crunching the Digest's latest numbers. Full details below.
Hmmm, what happened to the doom-and-gloom predictions about the Express Scripts/Medco merger, which would, as NCPA said, “make an already bad situation even worse”? As the data below show, it was never that bad, and it hasn’t grown worse.

As always, I welcome your constructive comments. Just remember our philosophy, courtesy of the late Senator Patrick Moynihan: "Everyone is entitled to his own opinion, but not his own facts."

Medicaid's impact on the pharma industry is growing. Based on early reports, Medicaid enrollments dominate public exchange sign-ups. Medicaid will be setting the pace for pharmacy reimbursements, per Obamacare Will Squeeze Pharmacy Profits. And, manufacturers will need to wrestle with new guidance on bona fide service fees when the Average Manufacturer Price (AMP) Final Rule is released in January.

Drug Channels readers can register with code DC15 and receive 15% off the standard registration rates. Thanks, Conference Forum!