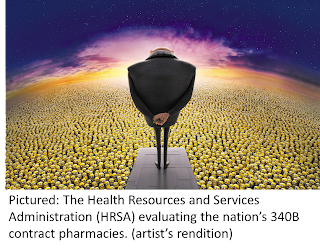 Last week, the Safety Net Hospitals for Pharmaceutical Access (SNHPA) launched a new defense of the 340B drug discount program in Setting the Record Straight on 340B: A Response to Critics. (free download) The reports takes aim at multiple critics, including an apparently notorious “Fein Blog.” Despicable me!

SNPHA rightly states that 340B contract pharmacies should “…maintain or expand access to affordable drugs for vulnerable patient populations in more convenient locations within their communities.”

In Hospitals twist prescription assistance program for their own benefit, I summarize how 340B hospitals are profiting from fully-insured, third-party paid prescriptions. Contract pharmacies are a crucial, but little understood, cog in this 340B machine.

To profile the 340B contract pharmacy market, Pembroke Consulting examined HRSA’s Contract Pharmacy Daily Report, as published on June 27, 2013. We screened out all terminated contracts (n=3,625) and any contracts that began after 6/27/13 (n=63). Then, we classified pharmacies by parent organization. For instance, our analysis classified Duane Reade and Happy Harry’s pharmacies as Walgreens pharmacies. 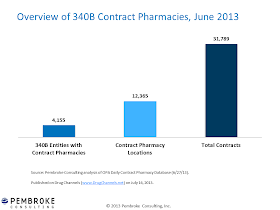 Walgreens is the biggest player, with 42% of all 340B contract pharmacy locations. The other major chains—Walmart, Rite Aid, and CVS—lag far behind. There are also thousands of independent drugstores and small chains. 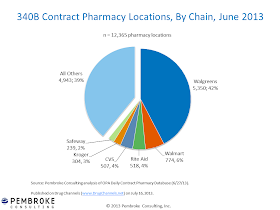 I estimate that Walgreen’s profits from 340B prescriptions are at least twice as large as its usual third-party payer margins. 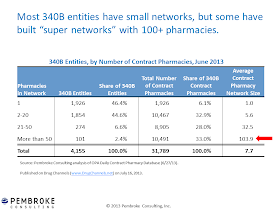 Digging deeper, we discovered that 101 340B entities (mostly hospitals) have built mega-networks with 50 or more pharmacies. Some of these networks have nearly 300 contract pharmacies.

A geographic analysis (not presented here) shows many contract pharmacies that are (1) located 50 to 100 miles away from its 340B hospital sponsor, or (2) operate hundreds of miles away in a different state. Many mega-networks are affiliated with urban hospitals, so 50 miles can hardly be considered the "local community."

As I said in my Fein blog: “Hospitals’ use of contract pharmacy networks should be scrutinized to be consistent with the program’s true intent.” In its report, SNHPA appears to agree by suggesting that multiple pharmacy arrangements “…should be studied to ensure that they are effective and advancing the purpose of the contract pharmacy program.”

Fair enough. But in the three years since HRSA's notice permitting pharmacy networks, the 340B contract pharmacy market has expanded in ways that no one anticipated. As the data show, hospitals are now building mega-networks that extend far beyond their "community," raising further questions about the economic motivations for this explosive growth.

Remind me again: Which side of the debate can truly claim membership in the Anti-Villain League?