New CMS Study: Preferred Pharmacy Networks are Cheaper (Except When They’re Not)

CMS examined March 2012 claims at 13 Medicare Part D Prescription Drug Plans (PDPs) with a preferred pharmacy network. Here’s my summary of the CMS data:
By demonstrating cost savings, the new CMS report will accelerate the growth of preferred pharmacy networks. Manufacturers can start getting ready for these networks by reading Pharmacy Benefit Networks: The Big Squeeze, my article from the May 2013 Pharmaceutical Executive.

PBMs, which favor preferred networks, cheered the CMS-documented cost savings. Independent pharmacies, which oppose these networks, touted problems with the five higher-cost plans. I explain the disparate perspectives below.

In its 2014 call letter, CMS noted concerns that costs might actually be higher in preferred networks than in non-preferred networks. See Will CMS Crack Down on Part D Preferred Pharmacy Networks? The newly-released CMS analysis explains the basis of these concerns.

Based on March 2012 data from 13 Medicare Part D Prescription Drug Plans (PDPs), CMS examined 50 drugs—the top 25 brand drugs and the top 25 generic drugs. CMS computed a weighted unit cost (WUC) for the preferred and non-preferred networks within each contract. Unit cost is defined as the negotiated price (ingredient cost plus dispensing fee) divided by the quantity dispensed. This approach standardizes costs to an equivalent unit, i.e., cost per pill.

Note that CMS looked at 2012 data. The 2013 market for preferred networks is much bigger, per Final 2013 Part D Data: Preferred Pharmacy Networks Still Win Big. For more background, see “The Narrow Network Revolution,” starting on page 115 of the 2012–13 Economic Report on Retail, Mail, and Specialty Pharmacies.

Here is my summary re-analysis of the CMS data. 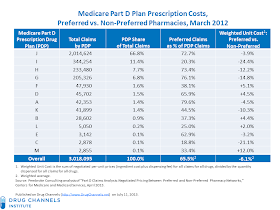 My observations:
THE CONTROVERSY

While both press releases describe the same study, the PCMA’s global point is more accurate, because 96% of the claims came from eight plans in which preferred pharmacy networks were less expensive. Keep in mind that preferred network savings come from reduced pharmacy margins, because pharmacies compete to be in a payer’s narrower network. So it’s no surprise that pharmacy owners don’t always like these networks.

However, the NCPA is right to cite the poor plan management for the five (or three?) Part D plans in which preferred networks were mystifyingly more expensive. As I note in the Drug Channels May news roundup, CMS has already blocked enrollment and marketing in Walgreen’s SmartD Part D plan due to “widespread failures in numerous important operational areas.” Time for further sanctions?

Given the 2013 growth in these networks, I expect CMS to update its guidelines regarding preferred networks. However, the cost savings shown in this new report support my view that preferred networks will continue to grow.