How the Pharmacy Industry Ch-ch-changed in 2012

Last week, the IMS Institute for Healthcare Informatics released its official 2012 market data in the report Declining Medicine Use and Costs: For Better or Worse? (Free download with registration.) The report offers loads of interesting stats, but I focus here on the prescription data.

The highlights:
Read on for my observations on the 2012 data and the five-year (2008-2012) pharmacy market evolution. Time may change us, but we can't trace time.

The chart below was created from the data on page 46 of the IMS report. Note that I present the data differently from IMS to give insights into retail pharmacy industry dynamics. 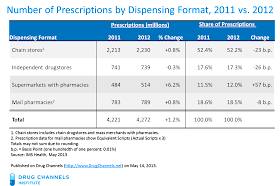 To put the 2012 numbers in context, here’s a look at the five year change in total prescriptions from 2008 through 2012. 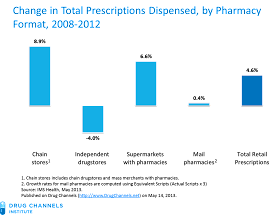 Chains under pressure in 2012. Prescriptions at retails chains—drugstores and mass merchants with pharmacies—grew more slowly than did overall prescriptions. I speculate that Walgreens is behind this unusual pattern. In 2012, Walgreen’s prescription business suffered due to its nine-month absence from the Express Scripts retail pharmacy network. Apparently, gains at CVS and Rite Aid couldn't overcome the overall chain sector decline. This is not their last dance, as I expect a return to above-market growth for chains in 2013.

From 2008-2012, chains were the winning diamond dogs. Despite a weaker 2012, prescriptions filled at chains have grown twice as fast as the overall market over the past five years. CVS, Walgreens, and Walmart have been the big winners over this longer period. See 2012 Market Share of Top Pharmacies for a look at 2012’s estimated share of prescription revenues by company.

Supermarket oddity. Calling Major Tom! Supermarkets were the unexpected winners, with market-leading prescription growth of 6.2%. The 2012 results break a multiyear trend of flat-to-negative prescription growth. I'm not exactly sure what happened. Did supermarkets pick up the lost Walgreen’s business? Did free generic Lipitor lure more consumers into food stores? Or, will IMS eventually revise these data to be more consistent with long-term trends?

Are mail’s golden years behind them? In 2012, prescription growth at mail pharmacies remained depressed. Mail pharmacies’ five-year total growth rate was only 0.4%. For a review of the multiple factors behind the slowdown, see pages 30-32 of the 2012-13 Economic Report on Retail, Mail, and Specialty Pharmacies.

Let’s dance. What do you think? Are you surprised by the latest data? What are your predictions for 2013?

BTW, I am totally entranced by "Space Oddity" as performed IN ACTUAL OUTER SPACE by Chris Hadfield, commander of the International Space Station. Click here for the full story from Space.com.