Key questions: Can the mega-combination truly achieve mega-savings? And if so, how much of those synergies will be shared with downstream customers? 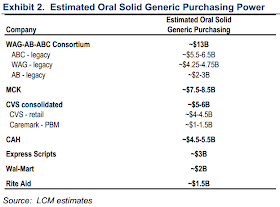 Per Lazard, these figures:
In Making Sense of ABC-Walgreens-Alliance Boots, I note that the synergies will come from buying power, comparison of contracts, and such better terms as more price protection or longer payment terms. The global synergies are also unknown, due to regional differences in drug formulations and packaging.


“As a matter of perspective, however, we don't anticipate that participants in the ABC-WAG/AB buying group will see their cost basis drop so much that it will force such partnering in an accelerated fashion. As shown in the table above, in recent years entities like MCK or CVS have represented materially greater generic purchasing power than a number of their peers — yet the landscape has remained competitive and the playing field seemingly even. How the players use their reduced cost basis represents another important variable as well. Of course lower costs could mean higher profits, reduced pricing to customers, or both. Is more better? Yes. But is it drastically game-changing? We don't think so.”

While I'm not a rap fan (shocking, I know), I do see that one of The Notorious B.I.G.'s most famous songs is called "Get Money." The new generic buying combination will surely be following his advice.