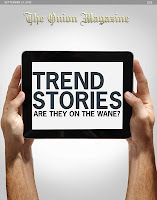 Express Scripts just released the latest iteration of its long-running Drug Trend Report. Instead of a convenient downloadable report, the report is now a confusing “interactive” web page. (3/20/13 UPDATE: Click here to download the full report.) You can also read the press release.

This year’s report includes both Express Scripts and legacy-Medco covered lives, so it’s the most comprehensive look at pricing and utilization. Once again, specialty drug trend of 18.4% dominated traditional drug trend of -1.5%.

Yes, you read that right. Spending on traditional drugs declined, for the first time ever. Below, I look at the factors behind these figures and provide some historical context.

Tune in tomorrow, when I look at these trends’ impact on the pharmacy industry.

Per the Methodology page, drug trend measures “the rate of change in plan costs, which include ingredient costs, taxes, dispensing fees and administrative fees.”

Observations:
Last year, ESI used “a random sample of approximately four million members who had prescription-drug coverage in 2010 or 2011.” I can’t figure out the sample base for the new report, but I will assume that it’s comparable enough to create the following chart. See if you can spot the trend in the traditional medications data. 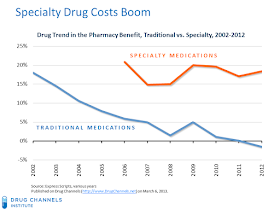 For fun, take a trip down memory lane on the new Timeline page. Remember 1997? Pfizer’s Lipitor launched, the Titanic sunk, and generics were a mere 42% of the market. The good ol’ days!