For infused drugs administered in physician offices, the latest data clearly show buy-and-bill is being displaced by specialty pharmacy providers (SPPs). For non-chemotherapeutic drugs, SPPs already have a greater share of billing volume than buy-and-bill. See the data below if you are not convinced.

Magellan highlights some clear negatives for SPP in the medical benefit, yet I believe buy-and-bill will continue to lose share. As I explain below, hospital acquisitions of oncology practices encourages payers to choose SPPs instead of permitting buy-and-bill. When compared with the aggressive profit-seeking behavior of so-called “non-profit” hospitals, white bagging may be the lesser of two evils for payers.

The 2011 ICORE Medical Pharmacy and Oncology Trend Report is based on self-reported survey responses from medical, pharmacy, and clinical directors at 50 health plans representing 157.2 million covered lives. The survey was conducted in mid-2012. Data wonks will enjoy the unusually clear description of the survey’s sample, methodology, and limitations.

The data are weighted by covered lives, making the results more representative than surveys that weight all responses equally. (The EMD Serono survey suffers from this limitation.) Almost two-thirds of the respondents also participated in last year’s survey, so the time trends should be reasonably accurate. 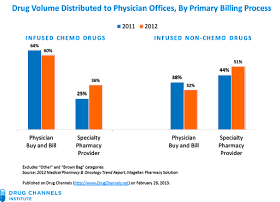 Observations:
Math geeks who read the report will see that the 2011 totals don’t add to 100%. Apparently, respondents were permitted to provide responses that did not sum to 100%. Maybe next year?

Magellan discusses three challenges to white bagging:
I’ll add another downside, which is the financial pressure on physicians. The office-based physician loses the ability to earn any profit margin on the drug, and must absorb any additional costs of handling and storage. For example, the office must maintain separate, patient-specific inventory of product and ensure that a patient’s designated product is in stock when the patient arrives for treatment.

An unanswered question: Are there significant patient access issues if physicians drop out of payer networks that insist on SPP white bagging?

Despite SPP’s potential negatives, payers are moving away from buy-and-bill. One reason may be the financial risk when a physician practice gets acquired by a hospital system.

As I highlight in How Hospitals Inflate Specialty Drug Prices, payers face much higher costs from hospital systems. After a hospital buys an independent oncology practice, it can generate more revenue for the same chemotherapy in the same office, due to differences in payment methods. Instead of buy-and-bill, hospitals get reimbursed by commercial payers based on a negotiated percentage of charges—the hospital's self-defined list price for a drug. Basically, a hospital marks-up a drug to create a stratospheric "charge," and then discount the charge to merely outrageous.

One-third of Magellan survey respondents report that oncology practices are being purchased by hospital systems. Here’s an interesting cross-tab for the Magellan analysts: Is white-bagging more common in plans that are seeing more acquisitions of oncology practices?