The highlights:
Part D beneficiaries annually choose their own new plan, rather than having a benefit administrator or insurance plan provide a few choices for them. Thus, these new data convincingly demonstrate the consumer appeal of preferred networks. This year’s Part D market should dispel any doubts about the narrow network revolution.

Last October, I identified the following 16 Medicare Part D prescription drug plans (PDP) with preferred network structures.
Five new plans launched for the 2013 open enrollment period. Some of other 11 PDPs did not have preferred networks in 2012, but adopted this network design for 2013. All of them give a Medicare Part D beneficiary the option of using other pharmacies. Any copayment or coinsurance will, however, be higher at a non-preferred pharmacy.

Data on PDP enrollment are available from this CMS page: Medicare Advantage/Part D Contract and Enrollment Data. Note that these data reflect enrollments accepted through December 5, 2012. The final numbers may be slightly different, because the open enrollment period ended two days later (on December 7, 2012). 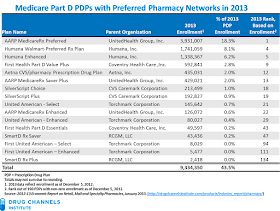 Observations and scorecard:
In 2013, narrower pharmacy network models will become a mainstream staple of both commercial and Medicare Part D plans. Expect these networks’ success to prompt howls of protest from the non-participating pharmacies.

To read more on narrow networks, see the section starting on page 115 of the new 2012–13 Economic Report on Retail, Mail, and Specialty Pharmacies.

P.S. Check out the latest edition of the Health Wonk Review for some great policy analysis.

CORRECTION: An earlier version of this article incorrectly stated the percentage of plans with Walgreen as a preferred pharmacy.