NOTE: For fresher data, see 2013’s Top Pharmacies by Rx Revenues: The Big Get Bigger.
Next week, we'll be releasing the 2012-13 Economic Report on Retail, Mail, and Specialty Pharmacies. Here's a sneak peek at my list of top pharmacies, ranked by total prescription revenues.

The exhibit below, one of 82 in my new report, shows estimated share of prescription revenues by company for calendar year 2012.
Read on for the 2012 details. For a sneak peek at the updated and expanded 2012-13 report, check out the free Overview. 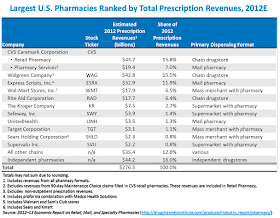 The chart reflects many significant market developments in 2012:

A few other comments:
I’ll tell you more when the report in launched next week. Stay tuned!

P.S. Feel free to cite or link to these estimates. As a friendly reminder, please attribute the source properly.
Adam J. Fein, Ph.D. on Tuesday, January 15, 2013