While the sky is not falling yet, the early data are not very promising. Same store pharmacy revenues were down by 16% compared to analysts’ expectations of an 11% drop. Shares were down 1.6% during a positive day for the market.

The next few months should look better, but Walgreen faces significant challenges in regaining lost customers. Below, I look at the detailed results, recent comments from Walgreen’s management, and offer some thoughts on Alliance Boots.

Here’s a look at the year-over-year change in same-store prescriptions, calendar adjusted for the number of weekdays. By looking at scripts rather than revenues, this metric eliminates any drug pricing effects, such as generic drugs’ negative impact on sales. 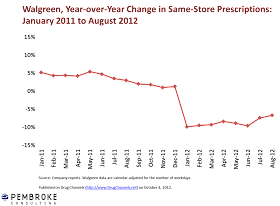 As you can see, January’s exit from the Express Scripts network hit hard. Since June, the trend has been positive. Although September only reflects two weeks back in the ESI network, I was expecting more improvement in September.

Don’t assume that the spectre of defeat hangs over Walgreen. The Walgreens Balance Rewards loyalty program now has 13 million members, so sales will get boost as its loyalty program kicks in. The start of a new benefit year should also goose activity.


“First, there are people who will come back right away. They are our most loyal patients who value our convenience and who've had long relationships with us, and that's who's been -- who we've been seeing in the first couple of weeks. The second bucket includes the people who will need a little convincing, and that's what we have our marketing plans in place for, including our $25 gift card to transfer their prescriptions back as well as our Balance Rewards program. The third bucket is a little tougher, and we'll see how the return works here over time.”

Despite repeated probing from Wall Street analysts, Walgreen refused to quantify its expectations about the relative size of the three buckets. Don't forget that 15 million TRICARE prescriptions won't be coming back for at least a couple of years. (See No regrets? TRICARE Shuts Out Walgreen.)

Since no one really knows, here’s my data-free guess:
Anything more than 50% in bucket 3 will surely scare the living daylights out of investors.

THE GUY WHO BLOGGED ME

No More Transparency. Every monthly sales report since January has called out the “negative impact on comparable store prescriptions filled due to not being part of the Express Scripts, Inc. pharmacy network.” In August, the effect was -10.7%. Going forward, these data have been labeled “For Your Eyes Only.” Walgreen will no longer report the Express Scripts’ impact, so it will be nearly impossible to determine what's happening. Shocking. Positively shocking.

From CVS with Love. Rival pharmacies are investing heavily to retain their new ex-Walgreen’s customers. CVS, which has been the biggest winner from the Express Scripts dispute, expects to retain 50% of those customers. (See How CVS Plans to Woo Walgreen’s Ex-Customers.) Other pharmacies will be fighting to keep every penny of money earned, too. Rite Aid’s CEO recently reiterated that “maintaining the new patients we receive due to the ESI/Walgreens dispute will certainly continue to be a top priority.” (source)

P.S. Tomorrow is Global James Bond day! You only live once, so be sure to celebrate with the one you love.