To illustrate how easy it is, below I compute the per-prescription profit margins for three brand-name and three generic prescriptions. I also discuss profit patterns for the 3,230 drugs with both acquisition cost and revenue data.

The era of transparency has arrived. Expect violent and strenuous protests about these data from the pharmacy industry. Download the data now, before the inevitable injunction.

You can get all information from CMS’ Survey of Retail Prices page. CMS provides detailed descriptions of the methodology behind the two surveys in these two documents:
The monthly NARP is based on 50 million nationwide retail pharmacy claims, or about 15% of the U.S. market. The revenue data includes: (1) the amounts paid for drug ingredient costs, (2) customer copayments or coinsurance, and (3) dispensing fees. In addition to an overall average, CMS also provides separate Medicaid, third-party, and cash-pay averages. Assuming the sampling is done properly, these data should be pretty accurate.

In contrast, the NADAC survey’s accuracy is unknown. As I discuss in Government Boldly Launches a Deeply-Flawed Survey of Pharmacy Acquisition Costs, the NADAC is voluntary and excludes certain off-invoice discounts. There are already some oddities in the data, such as multiple NARPs for multisource generics. For example, there are 13 NDCs listed for the simvastatin 20mg example shown below.

To generate the tables below, I combined the NADAC data (collected in September 2012, I think) with the NARP (from July 2012). CMS helpfully provides all data on Excel spreadsheets, so third-party payers and Medicaid programs can play along.

SHOW ME YOUR PROFIT

As a reminder, gross profit equals the revenues received by a pharmacy minus the costs of products (net of discounts and returns) bought from a manufacturer or a wholesaler. For a single prescription, these revenues include the amounts paid for drug ingredient costs, customer copayments or coinsurance, and dispensing fees. Gross margin expresses gross profit as a percentage of revenues. Gross profit measures the portion of a pharmacy's revenues available for the operating expenses and operating profit of a pharmacy.

The table below shows the per-prescription gross profit and margin for the common dosages of three widely-prescribed brand-name drugs—Abilify, Nexium, and Singulair. All three will be facing generic competition in the next few years, per the table in A New Generic Wave Update, Courtesy of Express Scripts. 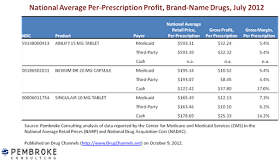 The table below shows the per-prescription gross profit and margin for the common dosages of three widely-prescribed generic drugs—hydrocodone APAP, simvastatin, and lisinopril. 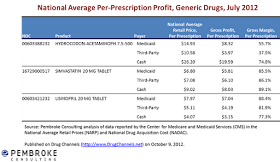 Cash is still king. For the six drugs above, gross profit and gross margin are higher for cash prescriptions. The exception is lisinopril, which appears on Walmart’s $4 list. As I have pointed out many times, pharmacies typically earn much higher profit margins from uninsured and underinsured individuals, a.k.a., cash-paying customers. This is a downside of healthcare reform for pharmacies—fewer uninsured consumers translates into lower profit margins. See Health Care Reform: Impact on Drug Channels, Post-SCOTUS. Exhibit 45 (page 68) of the 2011-12 Economic Report on Retail and Specialty Pharmacies presents overall self-reported pharmacy profit margins on cash-pay prescriptions.

Medicaid remains more generous. For three-quarters of the drugs, a pharmacy’s gross profit from Medicaid was greater than its gross profit from other third-party payers. On average, Medicaid permitted gross profits that were 18% higher than other third-party payers. Now you know why the states have been pressing CMS to conduct these surveys and publish the results, per the discussion in Coming Soon: Average Acquisition Costs for Pharmacies.The profit results also highlight two other healthcare reform downsides—the massive Medicaid expansion and the coming AMP-based Federal Upper Limits (FULs). See Generic Plavix: Let's Do the Price Limbo.

$4 generics are not loss leaders. For years, pharmacy associations have claimed that discount generic programs are “bait-and-switch” or a “PR stunt.” This is simply not accurate. Many common generic drugs can be acquired for pennies per pill, so discount generics merely represent a good old fashioned price war. The new CMS data are consistent with the realities that I outlined as long ago as December 2006’s Sloppy reporting about Wal-Mart.

Transparency = Trouble. With these newest data, CMS is opening up the distribution system to intense scrutiny over its profits. Pressure on channel profits from generic drugs will rise, posing profit risks to the entire channel—pharmacies, pharmacy benefit managers (PBMs), and wholesalers. As I point out in Chapter 5 (page 74) of the 2012-13 Economic Report on Pharmaceutical Wholesalers, a savvy analyst could combine the published AMP (wholesalers’ average purchase price) and NADAC data (wholesalers’ average selling price) to estimate a wholesaler’s average profit margins for a specific generic category. This would provide unprecedented transparency into a heretofore hidden wholesaler spreads.