The news is not as good as previous years. Here are five observations from the new report:
As always, I welcome your comments on this peek at pharmacy economics. To keep things civil, I include a few helpful ground rules below.

Let’s start with a review of the data’s strengths and weaknesses.

Gross profit equals the revenues received by a pharmacy minus the costs of products (net of discounts and returns) bought from a manufacturer or a wholesaler. Gross profit measures the portion of these revenues available for the operating expenses and operating profit of a pharmacy. Think of gross profit as Earnings Before Expenses (EBE). Gross Margin expresses gross profit as a percentage of revenues.

A pharmacy’s gross profit dollars can be spent in three primary ways:
This is a zero-sum formula. Increasing one part will decrease another. For example, increasing Owner Compensation will decrease Net Operating Income. A pharmacy could report a “net loss” if the pharmacy owner chooses to pay himself or herself a larger bonus instead of reporting a positive net profit.

The NCPA Digest reports the sum of Owner Compensation and Net Operating Income as Owner's Discretionary Profit (ODP). Thus, ODP represents 2 of the 3 ways a pharmacy's gross profit can be spent.

In 2011, independent pharmacies' overall gross margin from prescription and non-prescription products decreased by 110 basis points to 22.9%. After four years of growth, total gross margins have fallen back to 2006’s 22.8% gross margin.

OBSERVATION 2: An independent pharmacy’s profits per prescription are decreasing. 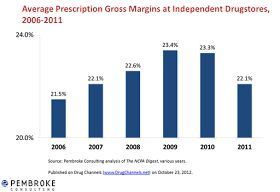 As I see it, these data highlight the risk and reward from the generic wave. The substitution of brand-name drugs for generic drugs is reducing pharmacies’ revenue growth. For the first time ever (?), the Digest's average per-pharmacy revenue dropped, from $4.0 million in 2010 to $3.8 million in 2011.

As in previous years, I compute the Owner’s Discretionary Profit (ODP) by multiplying the median ODP by average revenues.1 On a per pharmacy basis, this figure fell again, from $253K in 2010 to $234K in 2011 (-8%). The drop reflects both lower per-pharmacy revenue in the 2011 sample and a slightly lower median ODP figure.

In 2011, 76% of the Digest’s sample had ownership in a single pharmacy. As I pointed out last year, pharmacy owners have not been immune to broader U.S. economic weakness.

OBSERVATION 5: The total number of independent pharmacies increased in 2011.

Given the numbers above, you may be surprised to know that the total number of independent community pharmacies increased slightly, from 23,064 in 2010 to 23,106 in 2011. The appeal of ownership clearly hasn’t dimmed.

These data are especially ironic given NCPA’s constant “independents are vanishing” drumbeat. Consider this July 2011 NCPA blog post: Independent Pharmacy Closures Illustrate Need for Pro-Patient, Pro-Pharmacy Policies. Yes, you read that right. The NCPA's article was posted during a year when new pharmacy openings were greater than pharmacy closures.

I wonder how turnover affects the NCPA Digest. Do 2011’s slightly worse economic results reflect a new generation of pharmacy owners who are still building their businesses?

TELL ME WHAT YOU THINK

As always, I encourage constructive comments on the NCPA Digest data. Alas, these annual reviews tend to generate heated remarks from pharmacy owners. Excluding the Lake Wobegon pharmacies, half of the owners will write to complain that they are below average. The other half remain silent.

If you choose to share your thoughts, please keep the following ground rules in mind:
Comment away!

1 Math geeks should not fret that I am multiplying an average by a median. The distribution of Owner’s Discretionary Profit Percentage in the 2012 Digest has a very slight positive Bowley skewness (+0.03), i.e., the average is greater than the median. However, this figure is not statistically significantly different from skew=0, i.e., symmetry, so the average and median ODP are pretty close. See “Bonus Comment For Math Geeks” at the bottom of 2009’s NCPA Responds to Drug Channels.