This acquisition is another solid deal for McKesson. The combined companies will have about 28-30% of the ambulatory (non-acute care) medical-surgical distribution business. Cardinal Health will be distant second, with less than 10% of this business. As with US Oncology, the acquisition once again allows McKesson to snatch another likely target from Cardinal. At a more than-12X multiple of EBITDA, the deal is pricey. [NOTE: EBITDA multiple corrected from earlier version.]

For manufacturers, distributor consolidation once again blurs competitive boundaries between business partners. Companies with both pharmaceutical and vaccine portfolios will feel the most pressure. Read on for a quick look at the med-surg market and the transaction.

The distribution of pharmaceuticals to primary-care physician offices and other non-acute settings occurs primarily via the medical-surgical supplies distribution channel. Major national distributors include subsidiaries of McKesson and Cardinal Health, along with Henry Schein (NASDAQ: HSIC) and Medline (private). About half of the market is serviced by a boatload of local companies. This channel’s trade association is the Health Industry Distributors Association.

Major drug products used or administered in the physician’s office include vaccines, inhalants, ophthalmic ointments and solutions, antibiotics, and injectable anesthesia agents. In its 2012 fiscal year, pharmaceuticals accounted for about 22% of PSS’s revenues. 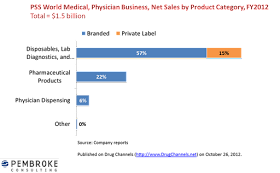 Private label products are 15% of PSS’s sales, up from 9% in 2006. Due to this mix, PSS’s gross margins have been about 33%, versus about 3.4% for core drug distribution. However, cost-to-serve is much higher, so overall operating margins are 6% to 7%. In its May Investor Day presentation, PSS estimated the size, growth and margin of its major markets as follows: 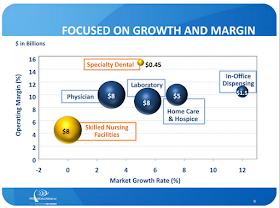 Pre-PSS, the med-surg business accounts for 2.6% of McKesson’s revenue, but 6.5% of its Earnings Before Interest and Taxes (EBIT). See Exhibit 54 (page 106) of the 2012-13 Economic Report on Pharmaceutical Wholesalers.

Through acquisition, PSS has built a ~$100 million (FY2013 run rate) in-office dispensing business. McKesson has been investing in oral oncology dispensing solutions for its specialty business, so it will be interesting to see whether McKesson tries to grow the business further. In 2008, McKesson sold off its institutional pharmacy outsourcing business. BTW, PSS has claimed to have stayed away from in-office dispensing’s controversial business practices, as described in The Incredible Economics of Physician Dispensing.

A med-surg distributors can influence a product's market share much more than a pharma wholesaler can, so the combination portends much more pressure on manufacturers and other suppliers. Keep an eye on the transition plans.