Yesterday, Medicare Part D kicked off its open enrollment period. Between now and December 7, America’s seniors will have the opportunity to keep their existing plan or switch to a new one. In 2010, Medicare Part D paid for about 20% of all retail prescription drugs.

In 2013, preferred networks will make a big splash in Part D. Listed below are the 16 prescription drug plans (PDPs) with preferred pharmacy networks, including five new 2013 plans. In this post, I look at these plans and provide some observations on the plans, the participants, and the economics.

We’ll have to wait until 2013 to know how successful these plans will be, but I stand by my earlier prediction that at least 40% of beneficiaries will be in a PDP with a preferred network. I’ll check back with these plans once CMS publishes the 2013 enrollment data.

Here is how the Centers for Medicare and Medicaid Services (CMS) defines “Preferred Pharmacies” to beneficiaries:


“If your plan has preferred pharmacies, you may save money by using them. Your prescription drug costs (such as a copayment or coinsurance) may be less at a preferred pharmacy because it has agreed with your plan to charge less.” (source)

For more on preferred networks, see the section starting on page 90 of the 2011-12 Economic Report on Retail and Specialty Pharmacies. The report also explains why commercial payers are adopting new network models more slowly.

Here’s a summary of 2013’s 16 preferred network PDPs. Five plans are being newly launched in the October 2012 open enrollment period, so there is no data for current enrollment. Note that some of 11 currently-operating PDPs did not have preferred networks in 2012. 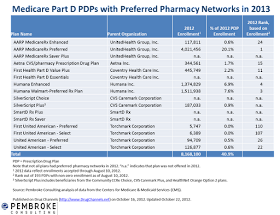