A Look at Drug Benefit Design in 2012

The just-released 2012 Kaiser/HRET Employer Health Benefits Survey (EHBS) delves into employer-sponsored health coverage at more than 2,000 companies. As you might expect nearly all (99%) covered workers in these plans have a prescription drug benefit.

In today's article, I review the latest findings on benefit design and consumer cost-sharing amounts. Some highlights:
Summary charts below. Don't let my brief lesson give you the wrong impression. The full report is a whopping 242 pages.

The 2012 report is based on responses from 2,121 firms, 91% of which offer health benefits to employees. The survey has a solid sampling methodology. Since many companies participate annually, the time trends are also pretty trustworthy. About three-quarters of the firms that completed the 2012 survey also participated in 2010 or 2011.

Drug Channels readers will be especially interested in the data on Prescription Drug Benefits (section 9). Here are links to the report and key sections:
Unfortunately, the report provides limited break-out of results by employer size, industry type, or other characteristics.

A consumer’s share of prescription costs is usually linked to benefit cost tiers—categories that define the plan member’s copayment or coinsurance. In general, prescription drug plans financially reward patients for using generic and lower-tier drugs by requiring the patient to pay progressively higher copayments or coinsurance for drugs on higher tiers.

The chart below shows the 2012 distribution of cost-sharing tiers. There was no statistically significant difference vs. last year. 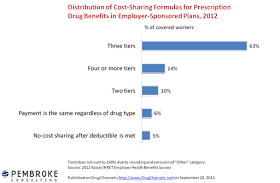 A SMILE ON MY COST-SHARING FACE 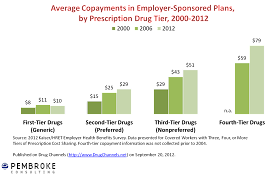 Coinsurance is much more common for the drugs on higher tiers. The percentages differ slightly across drug types because some plans have copayments for some drug tiers and coinsurance for other drug tiers. Here is a summary of the data in Exhibit 9.3. Note that there are some differences among plan types (HMO, PPO, etc.) 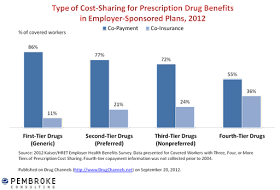 Only half of the employees face a maximum dollar amount of fourth-tier coinsurance. (See Exhibit 9.9.) For most people, this will create unrealistic financial burdens to gaining access to newer specialty therapies.

According to the latest Express Scripts Drug Trend report, specialty drugs have average monthly prescription costs of $2,000 or more. Coinsurance for fourth-tier drugs averages 32%, making the patient’s payment $640. It’s no surprise that 70% of biologic drugs have a co-pay offset program. See A New Reality Check on Co- Pay Offset Programs.

The report is silent about precisely which price would be used for computing the coinsurance amount. In 2008, this discrepancy created a PR problem for Kaiser Permanente. See Tier 4 Co-Pays and Pharmacy Prices, from 2008.

You may recall Smokey Robinson & The Miracles singing about formulary management in "The Tracks of my Tiers." Here they are singing "Tiers of a Clown," which addresses the emergence of four-tier pharmacy benefit plans. Thanks, Smokey!