Yesterday, a U.S. District Court judge dismissed most (but not all) of the antitrust claims from a lawsuit against Express Scripts filed by NACDS, NCPA, and a group of independent pharmacies. See Split Decision: Express Scripts, Pharmacies & Antitrust. You can read the ruling here.

So, today's rerun look backs at the FTC's decision to approve the Express Scripts/Medco Health Solutions merger. As you can see below, my original post includes comments about the then just-filed NACDS/NCPA lawsuit. Click here to see the original post and comments from April.

By a 3-1 vote, the Federal Trade Commission (FTC) approved Express Scripts’ (NASDAQ: ESRX) acquisition of Medco Health Solutions (NYSE: MHS). The FTC did not impose any conditions on the deal for antitrust approval, so there are no divestitures or conditions. Here’s the Wall Street Journal’s coverage: Express Scripts Closes Medco Acquisition.

Today, I review the FTC’s statement to explain the antitrust reasoning behind their decision. My predictions from last July (in ESRX-MHS: Antitrust Issues) turned out to be a pretty accurate guide to the FTC’s thinking. Pembroke Consulting clients and Gerson Lehrman Group clients can schedule phone calls with me for additional comments beyond what I discuss below.

And, no, this is not an April Fool’s post.

Both statements are brief, straightforward, and clear. I strongly encourage you to read them for yourselves.

In the interest of full disclosure, I want to let you know that I was hired in September by Express Scripts to submit written testimony to Congress about pharmacy industry economics. As soon as they contacted me, I ceased all public comment about the merger. (July’s three-part series was written before I even contemplated any participation in this matter.) As always, the information on Drug Channels is based upon my own independent opinions and analysis.

THE MARKET FOR PBM SERVICES


“Ultimately, the evidence fails to demonstrate that the transaction is likely to produce unilateral anticompetitive effects. As discussed, Express Scripts and Medco are not particularly close competitors. Other competitors, in the form of smaller PBMs and those owned by health plans, are current and growing competitors for employer business, and the bidding process frequently includes competitors outside of the Big Three. Observing these industry dynamics, the overwhelming majority of customers interviewed for this transaction, including most of the Fortune 100, view the transaction as competitively benign or even pro-competitive.”

This strong conclusion will surely undermine the legal challenges discussed below.

Concentration ratios were never as high as foes of the deal claimed. The FTC writes:


“The market for the provision of full-service PBM services to health care benefit plan sponsors is moderately concentrated and consists of at least ten significant competitors.”

Here’s a look at 2012 estimated store-based, retail prescription claims from the 2011-12 Economic Report on Retail and Specialty Pharmacies. 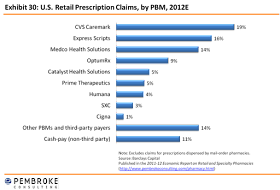 These 2012 estimates do not account for Medco’s loss, and OptumRx’s gain, of UnitedHealth’s PBM commercial business, effective January 2013. If this volume switch were incorporated into the estimates above, OptumRx’s share would increase to 13% and Medco’s share would drop to 9%.

The FTC answered the key question that I posed in July: Will competition remain strong enough to ensure that a portion of any cost savings (from bargaining power or efficiencies) get passed through to plan sponsors? The answer is on page 4:


“[T]he vast majority of customers believe that there would be adequate competition post-merger to ensure continued competitive pricing, and many believe that the merger will lead to lower prices for PBM services.”

The FTC’s research also uncovered market facts that are familiar to those of us who work in managed markets. The FTC examined the diversion ratio—a mathematical way to measure competition between two products or companies. For example, Medco and CVS Caremark are much more intense competitors with each other than with Express Scripts, which tends to service smaller employers. In other words, there is a low diversion ratio, particularly in the large employer market.

The most noise has been made by the pharmacy industry, which has been bellowing about “monopoly power” since the deal was announced.

As I have long maintained, complaints about "monopoly power" are misguided when describing the relationship between a PBM and pharmacies, manufacturers, or wholesalers. These other organizations are not customers of a PBM in the context of the supply chain. They are sellers of goods or services. See Chapter 4 of my economic report for a detailed analysis of the relationship between a PBM and the pharmacies that participate in a PBM’s network.

I prefer the econ-geeky term oligopsony—a market in which there are many sellers but few buyers. Sellers in a oligopsonistic market are understandably concerned about their own self-interest when market power becomes more concentrated with fewer, larger buyers. Thus, the FTC wrote:


“Although retail pharmacies might be concerned about this outcome, a reduction in dispensing fees following the merger could benefit consumers by lowering health care costs.”

Pharmacy owners’ blood will boil when they read that sentence, but it is a logical implication of U.S. competition policy.

I also happen to believe that the pharmacy industry’s concentration and organization create countervailing negotiating power against PBMs. The nine largest retail chains represent more than half of all U.S. community pharmacy locations and prescription revenues. In certain geographic markets, the level of retail concentration is even higher. Smaller pharmacies also have negotiating power with PBMs via Pharmacy Services Administration Organizations (PSAOs), which are often operated by multi-billion dollar wholesalers.

However, antitrust law does not allow pharmacies to collude on prices or coordinate boycotts, as the FTC reaffirmed to Congress at last week’s hearing on H.R. 1946, the “Preserving Our Hometown Independent Pharmacies Act of 2011.” The FTC’s testimony was unambiguous:


“Giving health care providers – whether pharmacies, physicians, or others – a license to engage in price fixing and group boycotts aimed at extracting higher payments from third-party payers would be a costly step backward, not forward, on the path to a better health care system.”

Together, Express Scripts and Medco Health Solutions will become a larger dispenser of specialty pharmaceuticals. However, manufacturers of specialty drugs exert tight control over this business, which will prevent the combined company from excluding competing pharmacies or engaging in other anticompetitive conduct.


“The principal concern raised by opponents of the transaction regarding specialty drugs is that the merged entity will have the power to demand more exclusive distribution arrangements from manufacturers. The evidence shows otherwise.”

As I point out in 7 Reasons Why Specialty Drug Dispensing Will Boom, dispensing of specialty pharmaceuticals will become less concentrated and limited distribution networks will become larger and more open.

This was a hard-fought battle by all sides of the debate. While the federal antitrust hurdle has been cleared, there are ongoing challenges from third-party lawsuits, such as the one filed last week by NACDS and NCPA. In addition to the association lawsuits, there have been rumors of a legal challenge by state attorney generals. However, I don’t believe their efforts will be successful given the FTC’s research.

Manufacturers have been comparing contracts and should be getting ready for some tough negotiations. There will also be derivative effects on wholesalers as the companies combine operations and rethink their supply chain.

And I wonder if the FTC's decision will cause Walgreens or Express Scripts to rethink their positions?