This week, the non-partisan Congressional Budget Office (CBO) released their latest look at the U.S. long-term budget outlook. (Links below.)

The news isn’t good. The U.S. is heading for a disaster of biblical proportions. Fire and brimstone coming down from the skies! Rivers and seas boiling! Earthquakes, volcanoes...human sacrifice, dogs and cats living together...mass hysteria!

Pharmaceuticals are less exposed to government spending than overall health care spending. Nonetheless, the numbers should give us all pause. CBO’s baseline scenario shows Federal spending on Medicare and Medicaid almost doubling, from 2011's 5.6% to 10.4% in 2037. National health care spending will rise to about 25% of GDP.

Read on for the grim details. Let’s hope we can sort it out before Gozer the Traveler returns.

I suppose we should all be good citizens and read the entire 105-page report. But even I will admit that the full report is a bit…dry.

While the CBO didn’t boil it down to a tweet, they did provide four options. In descending degree of masochism:
Note to wonky readers: Chapter 3 in the full report does a great job summarizing the federal government’s role in the U.S. health care system. Highly recommended!

Pharmaceuticals are less exposed to government spending than the overall health care industry.

Here’s the distribution of overall health care spending from the CBO report. The public share was 49% in 2010. 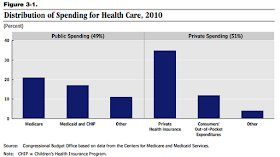 Below is my analysis of retail drug spending, using the data from Healthcare Reform Hits U.S. Drug Spending. In 2010, the public share of drug spending was a comparatively modest 35%. By 2020, the public share is projected to grow to 41%, although I estimate it will be about 4 percentage points higher if we factor in subsidized spending via health care exchanges. 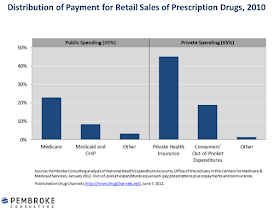 TERRIFIED BEYOND THE CAPACITY FOR RATIONAL THOUGHT

On page 53, CBO computes the “excess cost growth” of health care relative to growth in Gross Domestic Product (GDP). This excess equals the differences in the growth rates of health care spending per person vs. the growth of potential GDP per person, adjusted for changes in the age composition of the population. (See the full report for details.) 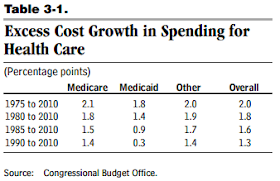 The numbers appear to have gotten a little better over time, which the CBO attributes to private insurance’s shift to managed care and Medicare’s change to fee-based (vs. cost-based) in reimbursement. For planning, CBO anchors on the 1985-2010 weighted average of 1.6%.

Mathematically, the above growth rates imply that 100% of GDP will eventually be consumed by health care. Of course, trees don’t grow to the sky, which is why CBO expects the rate of excess cost growth in health care to decrease.

THE DEPTHS OF THE SLOR

Check out CBO’s pretty reasonable description of what the future holds:


“In the private sector, people will probably face increased cost-sharing requirements; new and potentially useful health technologies will probably be introduced more slowly or be used less frequently than they would without the pressures of rising costs; and more treatments and interventions may simply not be covered by insurance.”

“In the public sector, people who would otherwise receive health insurance through Medicaid might become ineligible because of tightened eligibility rules or might be eligible but find that the scope of covered services has been reduced.”

In its models, the CBO assumes that the rate of excess cost growth will decline to zero in 2087. Yes, you read that correctly. Just a mere 75 years from now. How comforting.

CBO’s baseline scenario shows Federal spending on Medicare and Medicaid almost doubling, from 2011's 5.6% to 10.4% in 2037. National spending will rise to about 25% of GDP. That's a big twinkie. 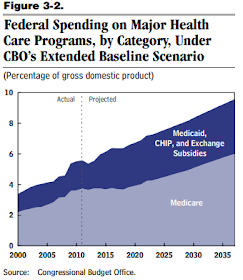 And in the voice of Dr. Egon Spengler, the CBO opines:


“The aging of the U.S. population and the rising costs for health care mean that the combination of budget policies that worked in the past cannot be maintained in the future.”

Translation: We'll have to cross the streams. And there's definitely a very slim chance that the U.S. will survive.