Prices are going down, down, down. According to this Consumer Reports article, pharmacies are already offering 80% to 90% discounts to cash-pay customers. The generic price war rages on.

How low can they go? Well, the latest Average Manufacturer Price (AMP) data, from the Center for Medicare and Medicaid Services (CMS) show wholesalers and large pharmacies purchasing most generic drugs for less than 10 cents per pill. Clopidogrel will get there quickly, judging by the self-inflicted MAC pricing by retail pharmacies.

The pharmacy industry's marketing is making generic drugs look more and more like every other consumer product. Manufacturers should incorporate these dynamics into loss-of-exclusivity (LOE) brand planning, while pharmacies and PBMs should limber up for the industry's inexorable downward economics.

CMS just published the Feburary 2012 Draft ACA FUL data file, which now includes detailed NDC information for the products included in the WAAMP. Note that the FULs and WAAMPs apply to an entire product group, so there is no data disclosure for the individual NDCs. Full details at this CMS page: Draft Affordable Care Act Federal Upper Limits.

These data are still considered to be in “draft” form, so they are not yet being used for reimbursement. CMS issued January’s proposed AMP rule, but the data won't convert to “final” form until CMS issues the AMP Final Rule in … 2013? I also note that the National Community Pharmacists Association (NCPA) is opposed to the publication and use of these data, as seen in their May 21 letter to CMS. 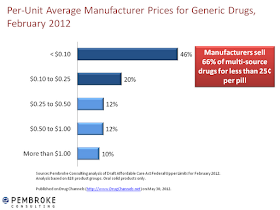 The chart above only shows oral solid products, which were 87% of the product groups reported for February 2012. In August, when the May data are published, clopidogrel AMP data should show up as product groups 2289 and 8121.

As a reminder, the AMP data reflect prices paid to the manufacturer by: (1) wholesalers for drugs distributed to retail community pharmacies, and (2) retail community pharmacies that purchase drugs directly from the manufacturer. Thus, the average acquisition cost paid by a pharmacy (to a wholesaler or a chain warehouse) may be higher. These data also do not shed light on price increases for generic injectables, which are purchased primarily by hospitals, physician offices, and clinics.

Retail pharmacies are engaged in a generic-prescription price war that began in 2006, when Walmart initiated its $4 generics program. Competition among pharmacies is removing generic margin dollars from drug channels (including mail pharmacies) faster than any AMP-based reimbursement limit. (See The Pharmacy Reimbursement Hit from AMP-Based FULs.)