Following last week’s look at preferred pharmacy network plans, I got multiple requests for a broader market overview of 2012 enrollment data for Medicare Part D Prescription Drug Plans (PDPs). On Valentine's Day, what could be more romantic than a Part D day!

Below, I present a summary of the largest Part D plans and parent organizations. The big story is enrollment concentration:
Despite this concentration, PBMs such as SXC's InformedRx (NASDAQ: SXCI) or CatalystRx (NASDAQ: CHSI) have minimal Part D penetration. Is yesterday's CatalystRx/AARP (non-Part D) deal a signal of things to come?

Here is an overview of the 193 PDPs with non-zero enrollment as of January 12, 2012. Click the table to enlarge it. 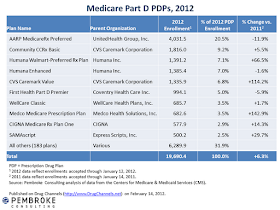 The top 10 individual PDPs had 68.1% of enrollees, a slight increase from 2011. As I discuss in Humana-Walmart Preferred Network Plan Wins Big in Part D, 2 of the top 10 plans have a preferred pharmacy network design. 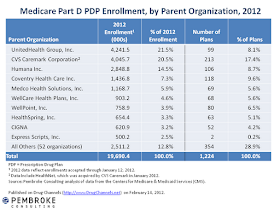 The enrollment share of the top 3 parent organizations grew from 48% in 2011 to 57% in 2012. However, this macro figure obscures significant share changes among the big 3 sponsors:
Due to this ever-growing concentration, manufacturers will be negotiating with more powerful Part D plans. Of course, this market-based outcome didn’t deter President Obama's DOA budget from proposing government-mandated Medicaid rebate levels for low-income Part D enrollees. So much for competition!