Get Ready for Part D Reform

The USA Today published an apparently exclusive analysis last Thursday showing that Medicare drug plan spending drops $6B in 2008, driven by ever-increasing generic dispensing rates. No matter how tomorrow's election turns out, there will be serious reform efforts aimed at the Part D prescription benefit in the coming year despite this good news on costs.

So, how will Part D reform happen? On the eve of the Presidential election, here are some initial thoughts on three likely options for reducing Part D. The impact on manufacturers, insurers, pharmacies, and wholesalers will range from trivial to world-changing, depending on how Part D reform happens.

As a bonus, I’m including a special Presidential election photo of my wife's great Halloween costume at the bottom.

It’s especially important to understand that does not pay directly for any drugs nor does it reimburse pharmacies for filling Part D scripts. Instead, pays a monthly per-enrollee prospective payment to plan administrators – stand-alone prescription drug plans (PDPs) or Medicare Advantage Prescription Drug plans (MA–PDs). These plans perform functions similar to, but not precisely the same as, a pharmacy benefit manager (PBM).

One benefit of today’s structure is the choice created with a competitive system with over 1,800 plans. There is substantial variation in deductibles, cost sharing, and coverage in the gap. The biggest perceived downside is the fragmentation of buying power among the many plans.

Senator Obama wants to “Allow Medicare to negotiate for cheaper drug prices” (Source). “Direct negotiations” has a simple, populist appeal that is hard to ignore. But this approach faces an extraordinarily large hurdle because the entire Part D program would have to be reconstructed to make it work. I think the program is too popular and entrenched at this point. Nonetheless, a majority of pharmacists support direct negotiations according to a recent Drug Topics poll.

Keep in mind that Senator McCain is no fan of Part D either, saying recently: “The prescription drug benefit was the wrong solution to the wrong problem.” (Source) He voted against the bill that created the Medicare Part D benefit and is a long-time critic of the pharmaceutical industry. Senator McCain claims not to favor direct negotiations because it would give the government a bigger role in setting prices.

Given the predilections of both candidates and the fiscal realities of Medicare, I believe that Part D will be reformed over the next few years regardless of who wins tomorrow. Here are my pre-election picks for realistic ways that the system will change, from smallest to greatest impact on the drug channels system:

1) Set up a Medicare Part D Rebate Program. The Medicaid Drug Rebate Program requires a drug manufacturer to have a national rebate agreement with the government for outpatient drugs dispensed to Medicaid patients. States can negotiate additional rebate agreements, too. So when “dual eligibles” – beneficiaries eligible for both Medicaid and Medicare Part D – were moved into Part D, manufacturer rebates declined. House Oversight and Government Reform Committee Chairman Henry Waxman (D-CA) highlighted this issue in a July 2008 report called Medicare Part D: Drug Pricing and Manufacturer Windfalls, which claims that the discrepancy in pricing between Medicaid and Part D “produced a windfall worth over $3.7 billion for drug manufacturers in the first two years of the Medicare Part D program.” A Part D rebate program would be much simpler to administer than “direct negotiations” and would be most politically viable by starting with dual eligibles.

2) Create a Government-run PDP. Another option would be to create a Government-run prescription drug program, an idea that I wrote about in November 2006. (See CMS as a PDP: A Part D compromise?) Medicare beneficiaries could have the option, but not the obligation, to enroll in a national plan based on directly negotiated prices. The current system of private PDPs could remain, in effect putting the government into competition with private plans. Two weeks ago, Avalere Health published a framework for thinking through this possibility called Mapping the Route: Approaches to Scoring a Government-Run Part D Plan. It’s a nice piece of work and worth reading for a high-level overview of the benefits and pitfalls of this approach.

3) Use Average Manufacturer Price (AMP) to Control Spending. is currently collecting AMP data from manufacturers for use in the Medicaid rebate program. What if requires Part D PDPs to adopt AMP-based methodologies for pharmacy reimbursement? Or mandates the use of AMP-based Federal Upper Limits (FUL) for both brands and generics in Part D? Long time readers may recall my post Part D + AMP = Trouble from last year. True, there are some AMP hurdles to overcome and the pharmacy industry will fight hard, but AMP would provide private insurers with a logical methodology to limit prescription spending.

I focus on the business impact of public policy in Drug Channels, so I’ll be keeping an eye on these options as they develop. As a brief summary, the first option above would be least disruptive to the pharmacy and drug wholesale industry because it would mirror the Medicaid program. Any additional savings would be paid as rebates and bypass the retail pharmacy supply chain.

The other two options would have much more significant effects. For example, the use of AMP within the Part D program would benefit pharmacies with the lowest cost of operations and a willingness to operate on a cost-plus basis. This is an important part of Wal-Mart's pharmacy strategy and has prompted new announcements by both and Walgreens. More to come later this week.

I’m sure all Americans will appreciate my wife’s excellent Halloween costume, regardless of your political leanings. As you can see, she dressed up as … Tina Fey? 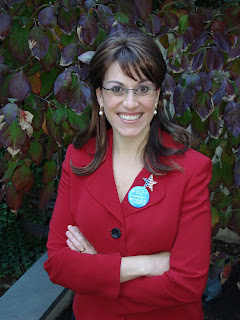