Drug Channel Profits in the Fortune 500

Since the Fortune 500 rankings were published last week, I thought it would be fun to look at the revenues and profitability of the ten companies on the list that participate in the pharmacy supply chain. (Hey, everyone needs a hobby!) The financial data also give me an opportunity to address critics who have accused me of being insensitive about the profits of pharmacies and wholesalers. I also look at average investment returns, which have been higher for the channel than for manufacturers.

Here are the ten wholesalers, pharmacies, and PBMs companies that I found on the Fortune 500 list along with rank and links to the financial data as reported by Fortune:

I only include companies that earned a majority of their revenues from pharmaceuticals. This criterion excludes other retail formats with pharmacies (supermarkets and mass merchants). I also do not separate the revenues from each company’s various lines of business. I'd be analyzing the original company data if this were a consulting project, but I'll stick to Fortune's admittedly crude metrics for the blog.

Keep in mind that the Fortune 500 rankings are based on sales revenues, so there is substantial double-counting in this list. For instance, revenue from the same prescription could be counted at least three times by companies on this list if:
(1) the drug is sold by a wholesaler to a pharmacy;
(2) the drug is sold by a pharmacy to a consumer; and
(3) the pharmacy receives reimbursement for from a PBM.

For comparison, there are nine pharmaceutical manufacturers on the Fortune 500 with revenues ranging from $61 billion (Johnson & Johnson) to $12.7 billion (Schering-Plough).

As you can see in the table below, Return on Sales (ROS; profit as percent of revenues) was in the low single digits for all companies in this group, regardless of their position in the supply chain (retail pharmacy, wholesaler, or PBM). The median for my Drug Channels group is 2 percent. 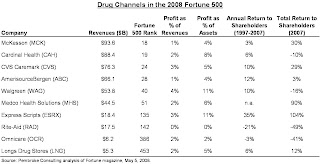 By contrast, median profit as a percentage of revenues was 16 percent of revenues for the nine drug manufacturers (range: -12% to 21%). Thus, the manufacturer-to-channel ratio is 8X.

The profitability of companies in the Drug Channels universe looks much more attractive on this basis, as my friends on Wall Street know. The group median is 5% (Range: 0% to 11%). Again, there is no clear pattern related to supply chain position.

The ROA figures are closer to the pharmaceutical manufacturers, whose median profits as a percent of assets is 9 percent (Range: -5% to 13%). The manufacturer-to-channel ratio is now only 1.8X (versus 8X for ) reflecting a risk-return tradeoff. The additional profitability for manufacturers can be considered an innovation/risk premium. Discovering and developing new medicines is expensive, risky, and time consuming. Obviously, the ratio could vary over time, although I just relied on the single year data provided by Fortune.

Investment returns for the Drug Channels group were higher last year as measured by the average Total Return to Investors for 2007 reported in Fortune’s list:

2007 appears not to be an outlier. The drug channels had a higher average 10 year total return than manufacturers. The channels group has a wider range for both time periods, in part reflecting a greater diversity of business models compared to manufacturers.

SO, WHAT HAVE WE LEARNED?

1) By a conventional metric (revenues), many drug channel participants are substantially larger than the manufacturers.

2) A frequently cited metric of profitability (Profit as % of Revenues) makes drug channels companies look worse than a more appropriate metric such as Profit as % of Assets.

3) Investors earned greater average total returns from the drug channels group last year and over the past 10 years compared to the manufacturers group.

Will these returns hold up in 2008? Well, if I knew the answer to that question with certainty, then I’d be retired on a island instead of pecking out another blog post for you!