Heretical Questions about the AMP War

As I mentioned on Monday, Reps. Nancy Boyda (D-KS) and Jo Ann Emerson (R-MO) introduced H.R. 3140 to “fix” the purported problems with Average Manufacturers Price (AMP) methodology in CMS’ Final Rule. There are 29 co-sponsors to the bill.

According to Drug Store News, NACDS and NCPA expect “… a loss of local pharmacy services and access for low-income patients in many rural and inner-city areas as pharmacies either drop out of the Medicaid program or close their doors after operating at a loss.”

The late Senator Patrick Moniyhan once quipped: “Everyone is entitled to his own opinion, but not his own facts.” In that spirit, I submit three heretical questions.

1) Is this really Pharmacy’s Last Stand?

Medicaid is projected to spend $27.1 billion on outpatient prescription drugs in 2008, equal to 11% of total US spending of $247.6 billion. (See page 14 of the National Health Expenditure Projections, which were made without considering AMP.) CMS’ projects total Federal and State savings from AMP of $1.3 billion, which would reduce national spending by 0.5%. That's right -- half of one percent.

Keep in mind that Medicaid spending dropped by $14 billion (-36%) in 2006 when dual eligibles moved to Part D. I certainly recognize that generics are much more profitable for pharmacies, but might I humbly suggest that rhetoric about reckless disregard for patient welfare is a bit overheated?

NCPA posted this graphic cartoon to illustrate the harmful effects of AMP. To check the accuracy of this cartoon, I reviewed a little-noticed study published by the PCMA last month called Consumer Access to Pharmacies In the United States, 2007.

The study found that consumers of independent pharmacies have access to many pharmacies within a reasonable driving distance. Three key findings:

This fact-based study used the pharmacy network adequacy standards established by Medicare. Unless I’m missing something, access seems pretty solid for quite a while.

3) Do we have too many community pharmacies?

Seeing the numbers above, I wonder if the U.S. retail pharmacy industry simply has too much capacity.

One of my favorite productivity stats is the Average Weekly Prescriptions Per Pharmacy, shown for the major store-based retail pharmacy channels. As you can see, the typical independent fills far fewer scripts per week than CVS, Walgreen (WAG), and Wal-Mart (WMT). 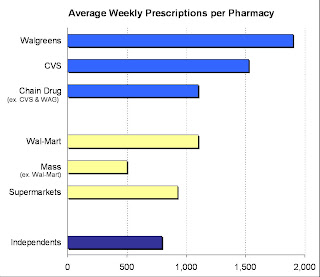 For some further perspective, consider Caremark’s mail operations in 2006. They operated seven mail order facilities and dispensed 60 million (90-day) prescriptions. That translates into 500,000 30-day prescriptions per facility per week – roughly equivalent to a single independent pharmacy’s dispensing for 15 years!

Look, I’m a realist. There are hundreds of community pharmacies in every congressional district. This story may have a quite predictable and politically motivated ending regardless of the economic facts.

Prove it, you say? Well, Ohio just became the latest state to pass a budget with an increase in the dispensing fee. At least the total increase must be less than the total savings from the Medicaid FUL change. (You can view the bill's text online, but must search for “dispensing fee” to find the relevant sections.)

Hmmm, I guess this explains why economists rarely get elected to public office...
Adam J. Fein, Ph.D. on Thursday, July 26, 2007