Does anyone understand what the impact of Wal-Mart’s move will be?

Not really, judging by this article from Drug Benefit News. It includes everything from well-reasoned analyses to real head-scratchers like this one: “When they wag their tail, a hurricane starts in China.” Not sure why China matters when Wal-Mart is not even close to being the largest buyer of generics.

Nevertheless, the majority of pharmacists seem to think Wal-Mart will have an impact judging by Drug Topics’ online poll. Most readers of this magazine are pharmacists. In case the link breaks, here are the results as of 11 AM on October 11: 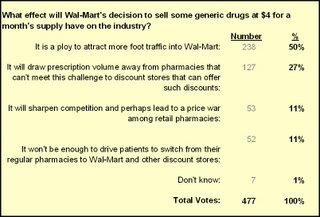 Granted, this is a highly unscientific poll. The pejorative framing of the question ensured that it would be first choice in the survey.

Yet more than half of the 477 respondents view Wal-Mart’s move as a “ploy” to drive store traffic. Note that they could have chosen “It won’t be enough to drive patients to switch…” Ploy or not, pharmacists are saying that Wal-Mart’s move will drive foot traffic. Today's WSJ-Harris poll indicates that Americans Likely Will Seek Low-Priced Generic Drugs At Discount Retail Chains -- so it looks like the pharmacists might be correct.