Here are some pharmacy benefit highlights from this excellent survey of employer-sponsored health coverage at more than 2,000 companies:
As I see it, the fourth-tier coinsurance boom is closely linked to copayment offset programs. With few formulary rebates available for specialty drugs, employers and their PBMs are daring manufacturers not to cover patients’ huge out-of-pocket costs. Thus, copayment offset programs for specialty drugs are becoming a roundabout way for payers to extract discounts from pharmaceutical manufacturers.

Read on for the tracks of my tiers.

TAKE A GOOD LOOK AT MY … SAMPLE

The 2013 report tracks health benefits at 2,067 firms, 90% of which offer health benefits to employees. Nearly all (98%) covered workers in these plans have a prescription drug benefit.

The survey’s sampling methodology is solid. Since many companies participate annually, the time trends are pretty reliable. Almost 80% of the firms that completed the 2013 survey also participated in 2011 or 2012.

Drug Channels readers will be most interested in the survey data on Prescription Drug Benefits (section 9). Here are links to the report and key sections:
Unfortunately, the report provides very limited break-out of results organized by employer size, industry type, and other characteristics.

For employees with third-party pharmacy benefit insurance, the share of a prescription’s cost is usually linked to benefit cost tiers. These categories define a plan member’s copayment or coinsurance. Prescription drug plans generally reward patients for using generic and lower-tier drugs by making them pay progressively higher copayments or coinsurance for drugs on higher tiers.

As Exhibit 9.1 (reproduced below) shows, the three-tier design—(1) generic drugs, (2) preferred brand-name drugs, and (3) non-preferred brand-name drugs—remains the most common, used in 59% of employer-sponsored plans. However, plans with four or more tiers have grown from 3% of employer-sponsored plans in 2004 to 23% in 2013. Note the big (and statistically significant) jump from 2012 to 2013. 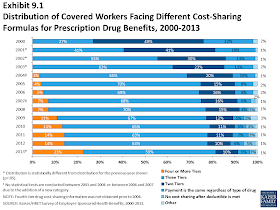 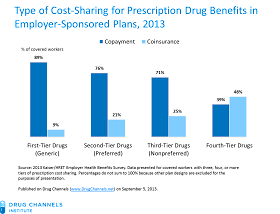 Fourth-tier plans offset payer’s costs and reduce utilization use of expensive specialty drugs. However, these benefit designs could also be totally counterproductive if they lead to non-adherence, excess hospitalization, and higher medical benefit expenses.

IF YOU LOOK CLOSER, IT’S EASY TO TRACE

Plans with four or more tiers can create financial burdens to accessing to newer specialty therapies. Coinsurance for fourth-tier drugs averages 32%, which means that a patient would pay more than $600 for an average specialty prescription of $2,000. Fortunately, 69% of employees have a maximum dollar amount (according to Exhibit 9.9).

Thus, the coinsurance boom highlights employers' subtle, behind-the-scenes discounting strategy:
Given the growth of fourth-tier coinsurance, it’s no surprise that pharmaceutical manufacturers have been stepping up copay offset programs that cover the patient’s out-of-pocket expenses. Nearly 70% of biological drugs have copay programs, compared with only 44% of traditional brand-name drugs. See A New Reality Check on Co-Pay Offset Programs. While copay offset programs generate enormous criticism, the coinsurance boom suggests that these programs will keep growing.

A final thought to ponder: For patients facing fourth-tier coinsurance and without access to copay offset programs, “Go broke or die” doesn't seem like a sensible policy to me.


For a deeper dive into formulary management, you should also review Tiers of a Clown.

P.S. To my fellow readers who will be welcoming 5774: L'Shana Tovah!