Next week, we'll be releasing the 2011-12 Economic Report on Retail and Specialty Pharmacies. Here's a sneak peek at my list of top pharmacies, ranked by total prescription revenues.

The exhibit below, one of 62 in my new report, shows my estimates for market share of prescription revenues by company for calendar year 2011. I estimate that the top six dispensing retail and specialty pharmacies—CVS Caremark, Walgreens, Medco Health Solutions, Walmart, Rite-Aid, and Express Scripts—will account for 64% of U.S. pharmacy dispensing revenues in 2011.

The future may look very different, as I explain below. 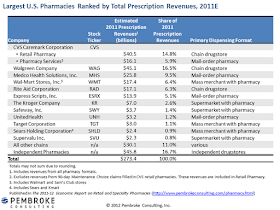 Note: Updated on 1/8/12 to include UnitedHealth's OptumRx mail pharmacy.
The share of the six largest players continues to increase, due to organic and acquisitive growth. Three notable combinations include CVS Caremark’s acquisition of Longs Drug in 2009, Walgreens’ acquisition of Duane Reade in 2010, and Express Scripts’ acquisition of NextRx in 2009.

I’ll tell you more when the report in launched next week. Stay tuned!

P.S. Feel free to cite or link to these estimates. As a friendly reminder, please attribute the source properly.