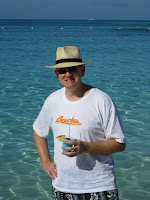 I’m going to take a break from blogging in July and August.
But never fear -- there's no need to lounge around reading Danielle Steel novels! Below are seven recommended books on the pharmaceutical and pharmacy industry.

Alas, there are no good books to recommend on pharmacy economics or the pharmaceutical supply chain -- the core topics of my Drug Channels blog. I’ll get around to writing that book one of these days.

I’ll be back after Labor Day unless some major news event compels me to write sooner. In the meantime, send me an email if I’ve missed your favorite book and I’ll add it to the list.

Have a great summer!

Dangerous Doses – Great book, especially if you want understand why passed a pedigree law. The book is somewhat outdated because industry changes have addressed many of the secondary market problems described in the book. Nonetheless, it is perhaps the most readable and suspense-filled book on my list. Highly recommended for fans of drug channels!

Skin in the Game: How Putting Yourself First Today Will Revolutionize Health Care Tomorrow – An intermittently interesting look at the concepts behind consumer-directed healthcare movement, notable because it is co-authored by John Hammergren, Chairman of the Board, President, Chief Executive Officer of McKesson (). Kudos to Mr. Hammergren for avoiding the usual self-aggrandizing CEO puffery, although there's too much filler that sounds like it was written by the large research team credited in the preface. Given the tone of this book and the importance of health care in the 2008 election, I am quite surprised that Mr. Hammergren has not donated any of his considerable personal wealth to a political candidate since he made a $1,000 contribution in 2000 to John Kerry. (Search OpenSecrets.org if you don’t believe me.) NOTE: See updated information about Mr. Hammergren's contributions in my comment below.

Protecting America's Health: The FDA, Business, and One Hundred Years of Regulation – This is a fascinating look at the evolution of the pharmaceutical industry and the history of drug regulation. Be warned – there are some shameful events in the industry’s past, but the book maintains a (mostly) even-handed perspective. The author conveys historical events in a lively and interesting way, so the book is an entertaining way to get an historical perspective on the politics and science of drug regulation.

Pharmaceutical Economics and Policy – This book provides an academic look at the economics of the pharmaceutical manufacturing industry. Read it to get grounded on some fundamental principles behind the industry and to better understand the strategies that pharmaceutical companies pursue. The book is quite dense, so I advise you to dip into it as a reference rather than trying to read it straight through, i.e., this is not beach reading. There are also many helpful references to reputable academic research about the drug industry.

Marketing Channels (7th Edition) – This MBA-level textbook is a must-own for any executive who thinks strategically about the way in which customers buy their company's products. While not specific to the pharmaceutical industry, many of the general principles apply to companies within drug channels -- pharmacies, wholesalers, PBMs, payors, salespeople, etc. I can personally vouch for the validity of their insights into channel strategy since I co-taught an executive education program at The Kellogg School with two of the co-authors, one of whom was on my PhD dissertation committee. (You can read my full review on Amazon.)

Guide to Federal Pharmacy Law – Alright, I’ll admit that this one is for hard-core pharmacy industry analysts only. I have used it as a reference on certain distribution issues, although the book does not cover every relevant topic and can be out-of-date on fast-moving topics such as pedigree. As a non-lawyer, I enjoy reading the author’s analyses of individual pharmacy law cases.
Adam J. Fein, Ph.D. on Thursday, July 03, 2008 6 comments:

I know that I promised to take a blogging break, but I just can’t help myself.

Today’s Capitol Weekly, the “newspaper of government and politics,” has an editorial by state Senator Mark Ridley-Thomas, sponsor of SB1307. As e-pedigree fans (?) know, this bill proposes a new phased-in timeline for ’s e-pedigree requirement. See CA E-Pedigree Timeline in Flux for details, although the bill has changed slightly since my last write-up.

Note this paragraph, which is clearly a rebuke to critics (like me) who argue that a national standard would be better:

Senator Ridley-Thomas’ editorial also represents a response to the Schwarzenegger’s Administration new legislative proposal for pedigree regarding an “accredited distribution chain,” which is similar to the “Normal Channel of Distribution” rules implemented in many states. (Read the first draft proposal here.)

I presume that Senator Ridley-Thomas is also not a fan of H.R. 5839 Safeguarding America’s Pharmaceuticals Act of 2008’s current legislative session ends in August, so any action on SB1307 will happen over the summer.
Adam J. Fein, Ph.D. on Thursday, July 03, 2008 5 comments:
‹
›
Home
View web version