Not content to rest on its laurels after October’s impressive healthcare.gov launch, the Centers for Medicare & Medicaid Services (CMS) proposed drastic changes to almost every aspect of the popular Medicare Part D program in January. To no one’s surprise, CMS has now run away from reconsidered this radical overhaul.

As I describe in CMS Wants It That Way: Big Medicare Part D Pharmacy Changes, CMS wanted far-reaching revisions that would have effectively killed preferred pharmacy networks. Medicare Part D is the rare government program that generally works wells and has widespread support from seniors. CMS proposed so many other changes that it created a diverse opposition, including a bipartisan group in Congress.

The final 2014 open enrollment data for Medicare Part D Prescription Drug Plans (PDPs) document the consumer appeal of preferred pharmacy networks. Consistent with the preliminary numbers, three out of four (75%) seniors enrolled in a PDP with a preferred pharmacy network design. See the updated summary—and the full text of CMS’s about-face—below. Plus, you can see our exclusive behind-the-scenes video of CMS's deliberations.

For 2014, there are 60 Part D plans with preferred pharmacy networks. These plans operate 851 regional PDPs, which account for 72% of the total regional PDPs for 2014. Consistent with the initial enrollment figures, these 60 plans enrolled 14 million people, or 75% of the total. As of January 10, 2014, the nine largest organizations (shown below) accounted for 89% of total PDP enrollments. 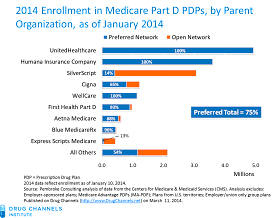 The full methodology and analysis behind the chart are in my previous article: For 2014, 3 out of 4 Seniors Choose a Narrow Network Medicare Drug Plan—and Humana, UnitedHealthcare Win Big.

After CMS announced its proposed revisions, here’s what happened:
ONE…TWO…FIVE

Perpetually self-interested pharmacy owners were pretty much the only beneficiaries of the proposed rule. The National Community Pharmacists Association (NCPA) was especially enthralled with the Any Willing Provider provision.

However, the Federal Trade Commission (FTC) has long contended that such Any Willing Provider laws reduce competition and increase healthcare costs. (example) As I noted in January:


CMS blithely disregards the fundamental economic question: With Any Willing Provider, why would any pharmacy now want to offer a “preferred cost-sharing” deal to a Part D sponsor? If these proposals are adopted, we could see preferred networks shrink substantially.

For instance, CMS’s study of preferred networks found that, on average, preferred pharmacies had prescription costs that were about 6% cheaper than those of non-preferred pharmacies. While preferred pharmacy costs were higher in 5 of the 13 plans studied, these plans accounted for only 4% of total claims. See New CMS Study: Preferred Pharmacy Networks are Cheaper (Except When They’re Not).

Given this latest development, I will reiterate the forecast from Chapter 8 of our 2013–14 Economic Report on Retail, Mail, and Specialty Pharmacies.

Here is an exclusive video of CMS Administrator Marilyn Tavenner getting ready to implement the proposed rule, followed by the marketplace's reaction. Click here if you can’t see the video.

Thank you for your recent letter on our proposed rule on the Medicare Advantage (Part C) and Part D prescription drug program. We believe that both of these programs have proven to be successful. Beneficiary satisfaction remains high, quality of care is improving, and premium growth has remained low – in part, thanks to changes in the Affordable Care Act. Yet, we see many opportunities to improve the programs to promote greater transparency, to reduce fraud, to simplify the benefits for beneficiaries, and to reduce the costs to the program. To ensure that the Medicare program remains solvent and affordable for beneficiaries, we believe we need to continuously review the benefits and premiums.

The proposed rule included many important provisions related to the Medicare Part C and D prescription drug program. During the rule’s comment period, we received numerous concerns about some elements of the proposal from members of Congress and stakeholders. In particular, we heard concerns about the proposals to lift the protected class definition on three drug classes, to set standards on Medicare Part D plans’ requirements to participate in preferred pharmacy networks, to reduce the number of Part D plans a sponsor may offer, and clarifications to the non-interference provisions. Given the complexities of these issues and stakeholder input, we do not plan to finalize these proposals at this time. We will engage in further stakeholder input before advancing some or all of the changes in these areas in future years. That said, we plan to finalize proposals related to consumer protections (e.g., ensuring access to care during natural disasters), anti-fraud provisions that have bipartisan support (e.g., strengthening standards for prescribers of prescription drugs), and transparency (e.g., broadening the release of privacy-protected Part D data) after taking into consideration the comments received during the public comment period.

In addition, we are committed to continuing to work with Congress to continue to ensure that Parts C and D work best for Medicare beneficiaries while remaining affordable. We look forward to working with you through our future rulemaking process and pledge our assistance as Congress considers any adjustments to these programs.